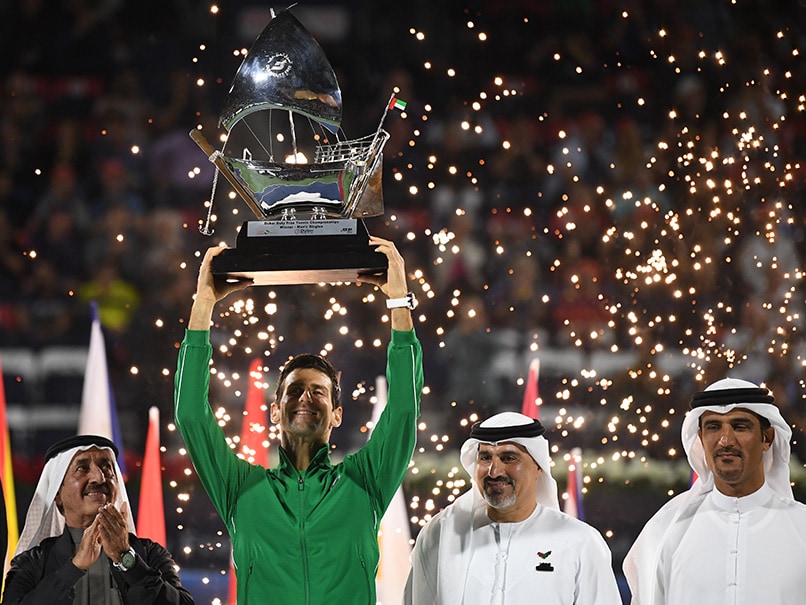 Novak Djokovic captured his 79th career title on Saturday when he won the Dubai Championships for the fifth time, defeating Stefanos Tsitsipas 6-3, 6-4 in the final. The world number one is now on an 18-0 winning run this season, and 21-0 overall since late 2019, as he ended an eight-match win streak for his Greek opponent, champion last weekend in Marseille. Djokovic claimed his third trophy of 2020 after helping Serbia to the ATP Cup and winning an eighth Australian Open. It is also the seventh time that the 32-year-old has won more than 20 matches on the trot.

Tsitsipas lost his second straight final in Dubai after going down to Roger Federer a year ago.

"It was close in both sets," Djokovic said. "A few points decided it, I've had a great week.

"I'm most proud of my consistency this week, especially on shots from the baseline."

The top seed produced a straightforward win in 79 minutes after a close-call semi-final where he saved three match points against Gael Monfils.

"I was just a point from going out, I might not have been here," the winner said. "But it shows how quickly things can turn.

"I appreciate the moment, I've really played well in my matches this week. There were some ups and downs, but that's normal."

Djokovic broke for 5-3 in the opening set and served it out moments later.

The second set was slightly tighter, with the Serbian losing a break as Tsitsipas levelled at 3-all.

But Djokovic came through again with a break for 5-4 as his opponent hit the net.

A game later, Djokovic was lifting another trophy as he found the corner with a winner.

"Tsitsipas is a player for now, much more than for the future," Djokovic said of his sixth-ranked opponent.

"He's already been very successful. He's more than just a great player, he's very charismatic and brings a lot to the game."

Djokovic added: "I've had a great start to the season, I love playing on hard courts. They've been my most successful surface so far."

Djokovic will stay number one on the ATP rankings on Monday to start a 280th week atop the table.

He was playing the final in Dubai for a sixth time in 11 appearances. It was, however, his first final at the tournament since 2015 when he lost to Federer.

Coming into the championship match, the 21-year-old Greek had lost just one set this week.

Djokovic was also awarded a 'golden visa' by the Dubai government and has agreed to return to defend his title in 2021.