Novak Djokovic also tightened his grip on the world number one ranking in the face of competition at this week's Acapulco event from second-ranked rival Rafael Nadal. 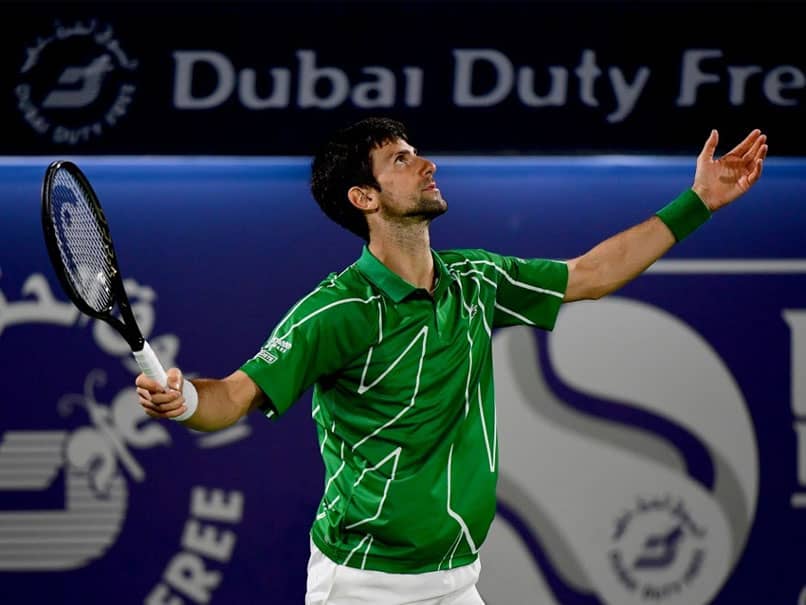 Novak Djokovic won his 16th match of an undefeated season, hammering Russia's Karen Khachanov 6-2, 6-2 on Thursday for a place in the Dubai Championships semi-finals. The world number one, playing in the UAE for an 11th time, will face either third seed Gael Monfils or Richard Gasquet for a place in the final. It will be four-time champion Djokovic's ninth appearance in the Dubai semi-finals. The top seed also tightened his grip on the world number one ranking in the face of competition at this week's Acapulco event from second-ranked rival Rafael Nadal.

Djokovic, who has yet to drop a set in Dubai this year, needed just 68 minutes to beat Dubai-based Khachanov for the third time in four meetings.

"The wind was even stronger today on the court, changing directions all the time. It was really, really tough to get the rhythm for the serve," Djokovic said.

"Karen made a lot of unforced errors, which obviously made my life easier especially in the first set to go up 5-1, two breaks.

"From my end it was a solid performance. I moved well in the defence. I was using the variety, the dropshots, always making him guess what is coming next. That was the goal obviously."

The two-hour and 23-minute duel, which allowed Greek Tsitsipas to claim a seventh successive win, set the day's programme at the Aviation Club back by more than an 90 minutes.

'I hung in there'

It followed another long struggle as Evans upset the sixth seed to reach the fourth ATP semi-final of his career.

World number 37 Evans said the thought of playing another set after more than two hours was just too much to consider and he worked hard to wrap up victory in straight sets.

"It was tough, I just hung in at the end and got through," unseeded Evans said.

"But I just didn't fancy playing another set. I think that's what got me through."

Tsitsipas trailed throughout most of the match against the 34th-ranked Struff, only taking the statistical lead late in the third set with a break for 5-4 which set up his victory.

"I was struggling with my return today, I don't know what was wrong with it," Tsitsipas said.

"I couldn't really find enough space to get that right momentum to hit the ball, that was the biggest struggle today.

"I'm actually pretty proud that I fought so hard, played with attention when I had to. When I got the break in the third set I knew that was my time to close the match now. I did it in perfect style."

Tsitsipas is defending his runners-up points from last year when he lost the final to Roger Federer.

He arrived in Dubai after winning the Marseille trophy at the weekend. Struff reached the quarters after spending just 39 minutes in winning his previous match.

Evans, 29, whose previous semi-final appearances came in Zagreb in 2014, Sydney in 2017 and Delray Beach a year ago, needed nearly two and a quarter hours to advance.

"Semi-finals in any tournament on the ATP Tour is great," he said.

Evans faced constant pressure from Rublev, who started this season with an 11-match win streak, lifting back-to-back trophies in Doha and Adelaide.