French Open 2020: Rafael Nadal will face either Novak Djokovic or Stefanos Tsitsipas in the final of Roland Garros. 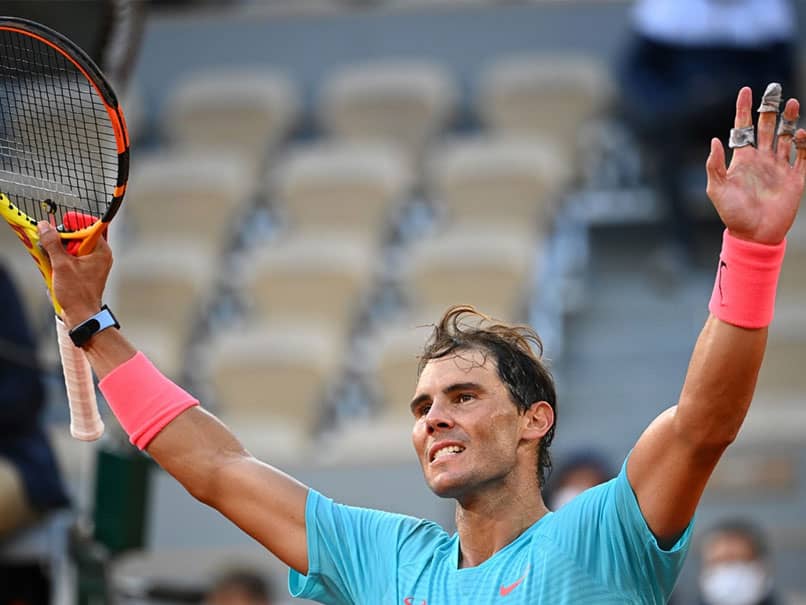 Twelve-time champion Rafael Nadal reached his 13th French Open final on Friday with a 6-3, 6-3, 7-6 (7/0) win over Argentina's Diego Schwartzman, setting up a potential blockbuster title clash against Novak Djokovic. For 34-year-old Nadal, it was a 99th win at Roland Garros since his 2005 debut and put him just one victory away from equalling Roger Federer's all-time record of 20 Grand Slam titles. He is also into his 28th final at the majors and has not dropped a set in the tournament this year. Djokovic, the 2016 champion in Paris and chasing an 18th Grand Slam title, takes on Greek fifth seed Stefanos Tsitsipas in the second semi-final.

The world number one has his own date with destiny should he make Sunday's final as he bids to become the first man in half a century to win all four Slams twice.

"It's always incredible to play here and this is a very special moment," said Nadal after a 10th win in 11 matches against Schwartzman who had shocked him in Rome last month.

"I played a couple of bad points in the third set but Diego is a very tough player. He probably makes more breaks on the tour than others.

"It was difficult until the end but it was a positive match for me."

The world number two then broke for 2-0 but Schwartzman retrieved it immediately.

It was a brief respite for the 5ft 6in (1.68m) player affectionately known as "El Peque" ("shorty"), as the 28-year-old was broken again in the fourth game.

The Argentine saved a couple of set points but dumped the third one in the net and the opener was Nadal's after 65 minutes on court.

Nadal was comfortably the stronger, breaking in the third and ninth games for a two sets lead.

With the match and his spirit seemingly drifting away, Schwartzman dropped serve again to go 3-1 down in the third.

But he rallied as Nadal slipped into passivity and by the 11th game he was on back on serve although he remonstrated with himself for squandering three break points that would have left him serving for the set.

That was his last chance as Nadal stormed through the tiebreaker.

The Argentine was left to regret his 48 unforced errors and converting just three of his 12 break points.

Djokovic has four titles in 2020, carved out from 36 wins and just one loss - his now infamous default at the US Open.

However, is the pressure beginning to tell? He dropped his first set of the tournament in his win over Pablo Carreno Busta in the quarter-finals and required treatment on his neck and shoulders.

Djokovic, 33, is bidding to make the Paris final for the fifth time and a 27th at the Slams.

Tsitsipas, 22 and playing in his second semi-final at the majors having reached the last four at the 2019 Australian Open, has got stronger as the tournament has progressed.

After dropping the first two sets of his opener against Jaume Munar, he has swept the next 15.

Tsitsipas is bidding to become the youngest man to reach the Roland Garros final since 2008 when Nadal won the title and youngest to reach a Grand Slam championship match since the 2009 US Open, when Juan Martin del Potro triumphed, 10 days short of his 21st birthday.

The Greek has only met Djokovic once on clay, a straight sets loss in the 2019 Madrid final.

Novak Djokovic Diego Schwartzman Rafael Nadal Stefanos Tsitsipas Tennis
Get the latest updates on IPL 2021, IPL Points Table , IPL Schedule 2021 , live score . Like us on Facebook or follow us on Twitter for more sports updates. You can also download the NDTV Cricket app for Android or iOS.