Petra Kvitova is one of the favourites to win a maiden French Open title after winning four titles this season, including on clay in Prague and Madrid. 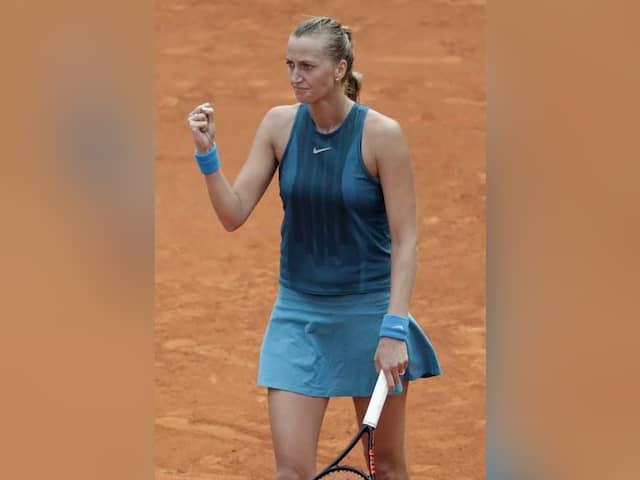 Petra Kvitova fought back from a set down to beat Paraguayan Veronica Cepede Royg.© AFP

Two-time Wimbledon champion Petra Kvitova fought back from a set down to beat Paraguayan Veronica Cepede Royg and reach the French Open 2018 second round on Monday. The eighth seed struggled early on Court Philippe Chatrier, but came through 3-6, 6-1, 7-5 to set up a meeting with Spaniard Lara Arruabarrena. Meanwhile, former world number one Victoria Azarenka's return to Grand Slam tennis lasted just two sets as the Belarusian slumped to a 5-7, 5-7 loss to Katerina Siniakova in the first round at Roland Garros.

The 28-year-old Kvitova is one of the favourites to win a maiden Roland Garros title after winning four titles this season, including on clay in Prague and Madrid.

"I've won 12 matches straight on clay, but I'm still a long way from Rafa," she said in reference to Rafael Nadal's upcoming bid for an 11th men's singles crown.

Cepede Royg, who surprisingly reached the last 16 in Paris last year, claimed the first set courtesy of a single break of the Kvitova serve.

But the Czech roared back, racing through the second set in only half an hour, before holding her nerve in a tight decider as Cepede Royg dropped serve in the 11th game.

Earlier, Azarenka, who missed much of last season after being embroiled in a custody battle over her son, was broken to love in the 12th games of each set to be dumped out by world number 57 Siniakova.

Czech Siniakova moves onto a second-round match with Ukraine's Kateryna Kozlova, who stunned defending champion Jelena Ostapenko on Sunday, in a part of the draw in which the only remaining seed is number 26 Barbora Strycova.

It was Azarenka's first Grand Slam match since losing to Simona Halep in the Wimbledon fourth round last July.

Comments
Topics mentioned in this article
Petra Kvitova Victoria Azarenka Tennis
Get the latest Cricket news, check out the India cricket schedule, Cricket live score . Like us on Facebook or follow us on Twitter for more sports updates. You can also download the NDTV Cricket app for Android or iOS.