Sania Mirza's son Izhaan Mirza Malik accompanied her and her partner Christina McHale on the court after they reached the women's doubles final of the 'Tennis In The Land' WTA tournament in Cleveland. 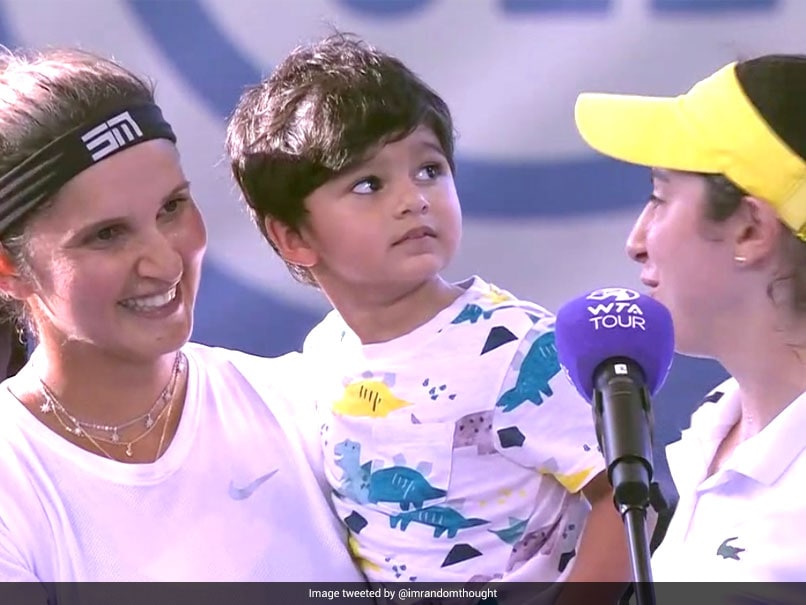 Indian tennis star Sania Mirza and Christina McHale on Saturday reached the women's doubles final in the 'Tennis In The Land' WTA tournament in Cleveland. After the match, the two were accompanied by a special guest as they went up for their interview. Sania Mirza's son Izhaan Mirza Malik accompanied them on court. In a photo shared by the tournament's Twitter account, Izhaan can be seen with Sania and McHale, holding both their hands and smiling. "Ladies and gentlemen: our first doubles finalists. (All three of them!)," the tournament's Twitter account wrote.

Ladies and gentlemen: our first doubles finalists. (All three of them!)

Mirza and McHale, an unseeded pair in the competition, will now face top seeded Shuko Aoyama and Ena Shibahara of Japan in the final.

Mirza and McHale had notched comprehensive wins without dropping a set in their previous two games.

Sania Mirza was last in action at the Tokyo Olympics, where she was paired with Ankita Raina. However, the duo were knocked out in the first round at the Games.

Sania Mirza is married to Pakistan cricketer Shoaib Malik. The two were blessed with Izhaan on October 30, 2018 and the two-year-old often pops up on the tennis star's social media.

Comments
Topics mentioned in this article
Sania Mirza Tennis
Get the latest updates on IND vs NZ 2021, check out the Schedule and Live Score . Like us on Facebook or follow us on Twitter for more sports updates. You can also download the NDTV Cricket app for Android or iOS.