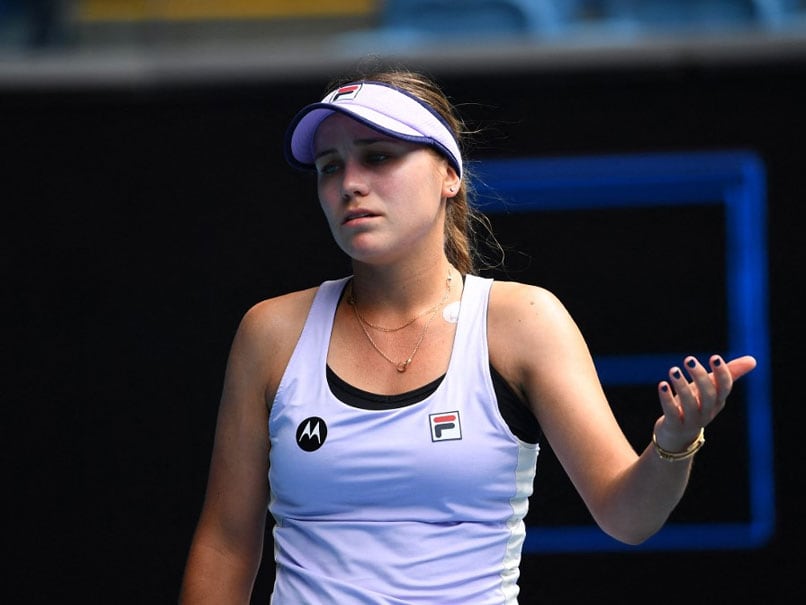 Sofia Kenin made 22 unforced errors as she was knocked out of the Australian Open.© AFP

A crestfallen Sofia Kenin exited the Australian Open in tears Thursday after a straight-sets defeat to Kaia Kanepi ended the world number four's maiden Grand Slam title defence. The 22-year-old American has struggled to handle expectations in Melbourne and was no match for the in-form Estonian, who won 6-3, 6-2 in 64 minutes in the second round. "I served really well and my game plan was to play aggressive," said Kanepi, who had 10 aces. Kenin's return to the scene of her breakthrough Grand Slam title, when she beat Garbine Muguruza in the final, has proved tough after she lost to the Spaniard at last week's Yarra Valley Classic.

She later declared she was troubled by a left groin injury, which she said might have been attributed to the mandatory 14-day hotel quarantine on arrival in Australia.

Moscow-born Kenin has cut an emotional figure and also admitted to playing in tears throughout her first-round clash with Australian Maddison Inglis.

A strong-serving Kanepi proved a bad match-up for Kenin, who had 22 unforced errors and offered little resistance as her title defence ended with a whimper.

Kanepi, however, has been in strong form, finishing runner-up in the warm-up Gippsland Trophy followed by a straight-sets victory over Latvia's Anastasija Sevastova in the Open's first round.

The 35-year-old plays 28th seed Donna Vekic of Croatia next.

Comments
Topics mentioned in this article
Sofia Kenin Tennis
Get the latest updates on India vs South Africa and check out  Schedule, Results and Live Score. Like us on Facebook or follow us on Twitter for more sports updates. You can also download the NDTV Cricket app for Android or iOS.