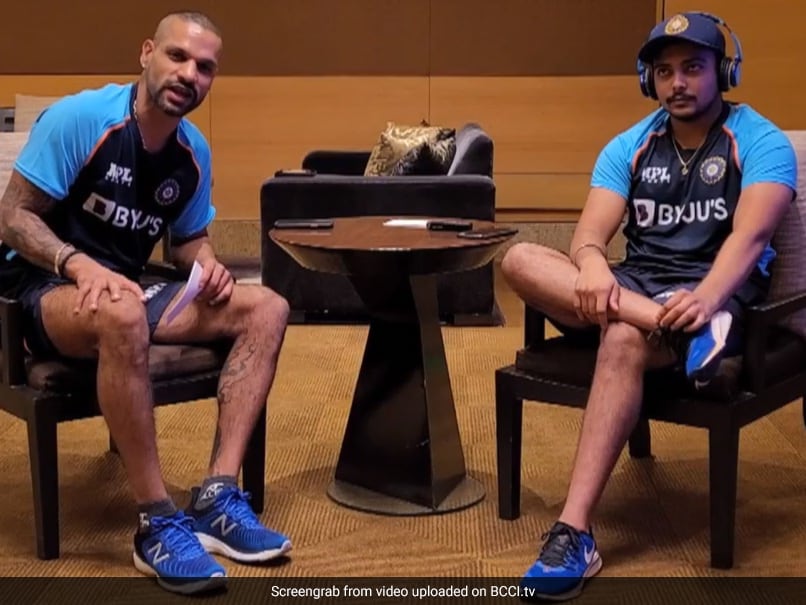 Shikhar Dhawan will lead the Indian side in the upcoming tour of Sri Lanka.© BCCI

The Board of Control for Cricket in (BCCI) on Thursday came up with an interesting game to keep their followers entertained and engaged on Twitter. The competition is called a "guessing game". There should be at least two participants to play the game. Stand-in India skipper Shikhar Dhawan and his Delhi Capitals (DC), as well as national teammate Prithvi Shaw, was the first one to play the game. The short clip of the same was shared on BCCI's Twitter handle. However, the full video of the game is available on BCCI's website. "Loud music blaring in your ears. Your teammate miming and mouthing words. This guessing game takes a hilarious turn very soon. Presenting Music and Mime - Shikhar Dhawan and Prithvi Shaw," BCCI captioned the video on the microblogging site.

The video starts with Shaw explaining the rules of the game to Dhawan as well as the viewers. After that, he picked a card from the table selected by Dhawan to start the game.

Loud music blaring in your ears

The camaraderie and the friendship of the cricketers was on full display as they tried to guess what the other player is trying to say.

At the end of the video, Dhawan and Shaw nominated India's middle-order batsman Ishan Kishan and Suryakumar Yadav to play the game next.

The post was a big hit on social media as several cricket enthusiasts praised the Indian board for sharing the videos of different activities of the players.

A user requested to let Devdutt Padikkal open the innings in India's Sri Lanka tour. He even went on to compare Padikkal with Sourav Ganguly.

"Please take Padikkal for opening. He will surely continue his form and prove himself. India got the best left-handed batsman after Ganguly," the comment read.

Please take padikkal for opening. He will surely continue his form and prove himself. India got the best left handed batsman after ganguly. @devdpd07

Shikhar Dhawan Prithvi Shaw
Get the latest updates on ICC T20 Worldcup 2022 and CWG 2022 check out the Schedule, Live Score and Medals Tally. Like us on Facebook or follow us on Twitter for more sports updates. You can also download the NDTV Cricket app for Android or iOS.