Sri Lanka will deploy unprecedented security for Thursday's fourth one-day international against India to prevent a repeat of crowd trouble which broke out following a humiliating defeat for the home side, police said. 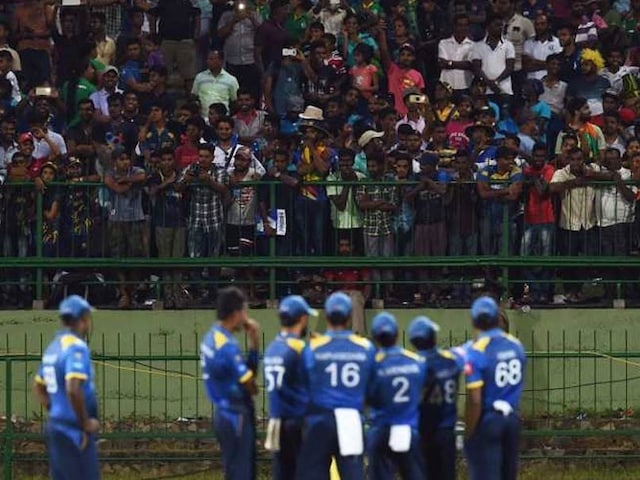 Sri Lanka will deploy unprecedented security for Thursday's fourth one-day international against India to prevent a repeat of crowd trouble which broke out following a humiliating defeat for the home side, police said. Some 1,000 additional police will be deployed at the 35,000-seat capacity Premadasa Stadium in Colombo while CCTV cameras will be used to monitor the crowds, police said in a statement. "Any spectator who throws any bottles or projectiles at the players will be immediately arrested," they said.

Large number of fans lobbed bottles and other missiles and disrupted play for 32 minutes as Sri Lanka headed for their one-day international series defeat to India last Sunday.

Soon after play resumed at Pallekele with police evicting the rowdy supporters, India went onto to record a six-wicket win.

Sri Lanka's chief cricket selectors, who resigned en masse on Tuesday, said they were heartbroken when crowds turned against the team.

"The heartbreaking incidents of unruly behaviour we witnessed at Pallekele last Sunday were the last straw for us," they said in a statement Wednesday explaining their decision to quit.

On August 24 Sri Lankan players had to remain inside the dressing room until police cleared hostile crowds after the team lost the second ODI by three wickets.

The ODI series loss came hard on the heels of India's three-Test series whitewash of Sri Lanka on home soil.

The latest losses only compounded the misery for the national side, which suffered a humiliating ODI home series defeat against bottom-ranked Zimbabwe and bowed out early from the Champions Trophy in England.

They have also been beset by injury, with batsman Dinesh Chandimal ruled out of the remaining ODIs with a thumb injury and Chamara Kapugedara also likely to miss the matches.

Fast bowler Lasith Malinga is expected to lead Sri Lanka in the next game.

Sri Lanka will play the remaining two ODI matches against India this Thursday and Sunday, and a one-off Twenty20 match against the visitors on September 6.

(This story has not been edited by NDTV staff and is auto-generated from a syndicated feed.)
Comments
Topics mentioned in this article
Sri Lanka Cricket Team India Cricket Team Virat Kohli Upul Tharanga P Sara Oval, Colombo R.Premadasa Stadium, Colombo Sri Lanka vs India 2017 Cricket
Get the latest updates on IPL 2020, check out the IPL Schedule for 2020 and Indian Premier League (IPL) Cricket live score . Like us on Facebook or follow us on Twitter for more sports updates. You can also download the NDTV Cricket app for Android or iOS.