Hardik, who scored 107 runs at lunch on Day 2, is the most by an Indian batsman before lunch on any day of a Test. 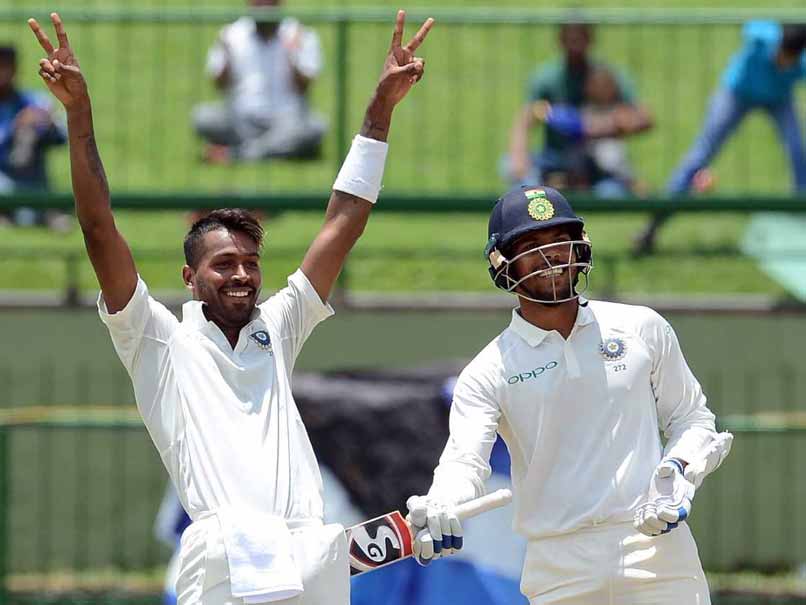 Hardik Pandya celebrates after scoring a century as Umesh Yadav looks on.© AFP

India all-rounder Hardik Pandya scored a brilliant maiden Test century off just 96 balls to propel the visitors to 487 in their first innings in the third and final Test at Pallekeleon Sunday. In his innings of 108 runs, Hardik hit eight boundaries and seven maximums. While doing so, Hardik equaled the record of Virender Sehwag who hit seven sixes against Sri lanka at Brabourne in 2009. The record is held by Navjot Sidhu who hit eight against the same opposition in Lucknow in 1994. The right-handed batsman became the first Indian batsman to score 26 runs in an over and surpassed the previous record of 24 runs which was scored by Sandeep Patil off Bob Willis in Manchester in 1982 and by Kapil Dev off Eddie Hemmings at Lord's in 1990.

Hardik, who scored 107 runs at lunch on Day 2, is the most by an Indian batsman before lunch on any day of a Test. Previously, the record was held by Virender Sehwag who scored 99 runs against West Indies in Gros Islet in 2006.

Along with these, Hardik only took 86 balls to reach his century is the second fastest for an Indian player away from home, after the 78-ball hundred by Virender Sehwag against West Indies in Gros Islet in 2006.

The 86-ball hundred by Hardik, is also the joint-fastest hundred by a visiting player in Sri Lanka alongside Wasim Akram's 86-ball effort against the hosts in 2000.

Hardik's 108 is the third-highest score by any player batting at number eight or below against Sri Lanka and also the second-highest against them in Sri Lanka. Daniel Vettori scored 140 at the SSC in 2009. The previous highest for India was 82 by Irfan Pathan in Ahmedabad in 2005.

Comments
Topics mentioned in this article
India Cricket Team Sri Lanka Cricket Team Hardik Pandya Sri Lanka vs India 2017 Cricket
Get the latest updates on ICC T20 Worldcup 2022 and CWG 2022 check out the Schedule, Live Score and Medals Tally. Like us on Facebook or follow us on Twitter for more sports updates. You can also download the NDTV Cricket app for Android or iOS.