India, who resumed the day on 329-6, lost an early wicket but overnight batsman Pandya kept up the lower-order fight with his 93-ball blitz in an extended morning session in Pallekele. 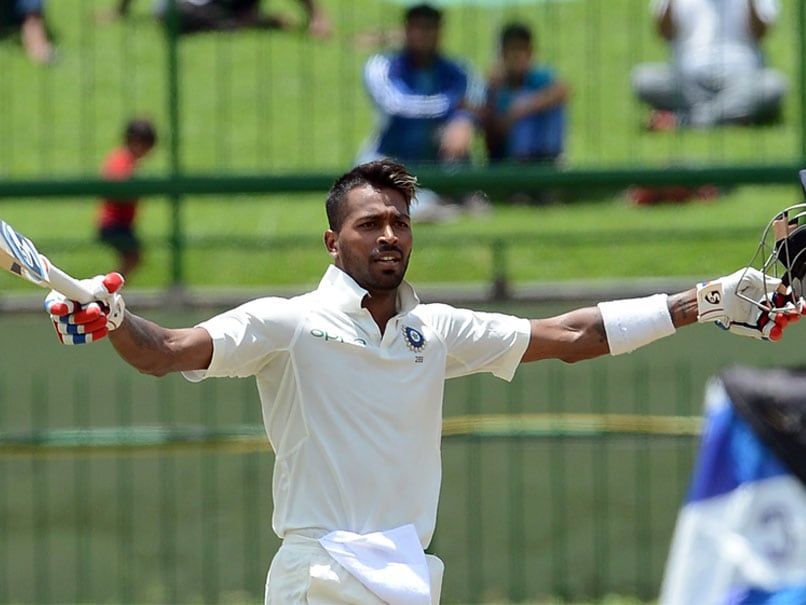 Pandya scored a ton in only his 3rd Test.© AFP

All-rounder Hardik Pandya smashed his maiden Test century to power India to 487 in their first innings on day two of the third and final match against Sri Lanka on Sunday. India, who resumed the day on 329-6, lost an early wicket but overnight batsman Pandya kept up the lower-order fight with his 93-ball blitz in an extended morning session in Pallekele. Pandya, playing in his third Test, was dismissed for 108 after putting up 66 runs with Umesh Yadav for the last wicket.

Sri Lankan spinners Lakshan Sandakan, who took two wickets in the first session, and Malinda Pushpakumara have shared eight wickets between them so far.

But the day belonged to Pandya, who built crucial partnerships including a 62-run eight-wicket stand with Kuldeep Yadav.

Sandakan's left-arm wrist spin broke the stand by dismissing the left-handed Kuldeep caught behind for 26.

What an unbelievable innings by Hardik Pandya.Counter attack at its best.Scored his first 50 of 61 balls ,the second of 25.Brilliant#INDvSL

But Pandya, 23, pressed on with the assault even after the fall of the ninth wicket as he took on Pushpakumara, smashing two fours and and three sixes in an over off the left-arm spinner.

Pace spearhead Vishwa Fernando struck early with the wicket of wicketkeeper-batsman Wriddhiman Saha, who added just three runs to his overnight score before being caught in the gully for 16.

A 188-run opening stand between Shikhar Dhawan, who smashed 119, and Lokesh Rahul, who made 85, had paved the way for India's commanding total after the visitors chose to bat first.

India are eyeing a a series sweep after taking an unassailable 2-0 lead in Colombo.

Comments
Topics mentioned in this article
India Cricket Team Sri Lanka Cricket Team Hardik Pandya Cricket Sri Lanka vs India 2017
Get the latest updates on Olympics 2020, Olympics 2020 Medal Tally, Live Cricket Score . Like us on Facebook or follow us on Twitter for more sports updates. You can also download the NDTV Cricket app for Android or iOS.