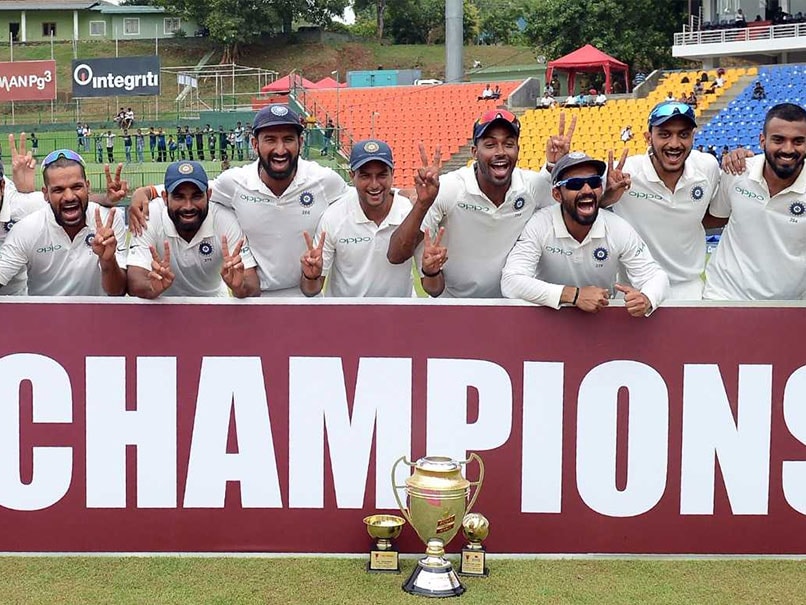 India beat Sri Lanka by an innings and 171 runs in the third Test to win the series 3-0.© AFP

Ravinchandran Ashwin and Mohammed Shami helped India seal an innings victory over Sri Lanka in the third Test at Pallekele to complete a series whitewash over their neighbours on Day Three of the third and final Test on Monday. Ashwin ended with figures of 4/68 while Shami finished with 3/32 in the second innings. India had already clinched the series in Colombo when they had taken a 2-0 lead after having won the first Test at Galle. This series win was historic for India as it was their first three-Test series sweep outside of the country.

Sri Lanka were bowled out for 181 in their second innings after managing only a paltry 135 in their first to hand India an innings and 171-run win.

Centuries from Shikhar Dhawan and Hardik Pandya had helped India post 487 in the first innings.

None of the three matches lasted five days, with the final one being the shortest, lasting just two and a half days.

With Sri Lanka resuming the day at 19 for one after following-on and facing a 352-run deficit, the final outcome was a foregone conclusion. The hosts were eventually bundled out for 181 in 74.3 overs in their second innings shortly before tea on day three to hand the visitors a first-ever series clean sweep on overseas soil.

The pace duo of Umesh Yadav (2/21) and Shami provided the early breakthroughs for India before the spinners Kuldeep Yadav (1-56) and Ashwin (4/68) made further inroads. Shami was most impressive as he bowled with pace and precision, carrying on from his showing in the first innings where he had struck twice.

With Sri Lanka struggling at 82 for four at lunch, it became certain that the game will not stretch to the fourth day, ensuring an extra day's rest for the Indian team ahead of the five-match ODI series starting Sunday.

Post lunch, Dinesh Chandimal (36) and Angelo Mathews (35) took their fifth wicket partnership to 65 runs. Their stand was the bare minimum resistance to the Indian attack on this third day, and it only helped in delaying proceedings a tad as the duo brought up Lanka's 100 in the 49th over.

Kuldeep got the breakthrough as Chandimal was caught at short leg in the 51st over. Three overs later, it became a double blow as Ashwin trapped Mathews lbw to end all hopes of a stronger Lankan fightback.

Niroshan Dickwella (41) played some aggressive strokes but wickets kept falling regularly at the other end. Dilruwan Perera (8) was caught off Ashwin at midwicket, like in the first innings, and then Mohammed Shami (3-32) had Lakshan Sandakan (8) caught behind. Ajinkya Rahane took a sharp catch at gully to dismiss Dickwella off Yadav in the 70th over.

Shortly afterwards then, Ashwin bowled Lahiru Kumara (10) to wrap up a comprehensive series win for the world number one side.

In the morning session, Shami bowled a fiery opening spell while Ashwin removed opener Dimuth Karunaratne (16) at the other end.

The ball took extra bounce and lobbed off his glove as the batsman was caught at slip in the third over of the morning. Shami then had nightwatchman Malinda Pushpakumara (1) caught behind in the 21st over. Two overs later, he got the big dismissal as well, trapping Kusal Mendis (12) lbw with a sharp inswinger.

The hosts lost three for 13 in the first passage of play this morning. Thereafter, Sri Lanka crossed 50 in the 26th over, with Chandimal and Mathews holding fort together. The duo gave up on the attack-minded tactic against the Indian bowling, instead looking to play for time.

In the 35th over, Mathews survived a shout for caught behind off Umesh Yadav (0-23), even as India appealed for DRS against the original not out decision. But there was no evidence to over-turn the decision as Mathews continued his innings.

On day one, Dhawan (119) and KL Rahul (85) put on the highest opening stand of 188 runs on Lankan soil as India finished at 329/6 at stumps. On day two, Pandya scored his maiden Test hundred off 86 balls to help India reach 487 in their first innings. Sri Lanka then collapsed to 135 all out in their first innings with Kuldeep picking 4-40.

India won the first Test in Galle by 304 runs and the second Test in Colombo by an innings and 53 runs.