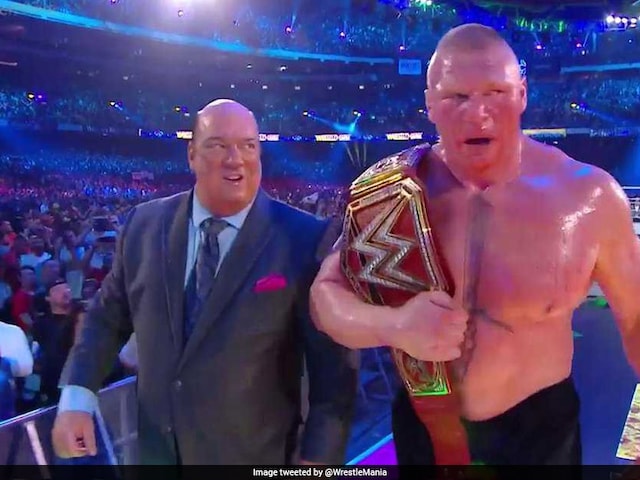 Brock Lesnar on Sunday beat Roman Reigns to retain the WWE Universal Championship Title at the Wrestlemania 34. The much-awaited blockbuster event took place at the News Orleans' Mercedes-Benz Superdome with 78,133 fans in attendance. Reigns faced the wrath of Lesnar after the latter hit six German Suplexes to decimate his opponent. Lesnar also gave a tough fight hitting Lesnar with four Superman punches and as many spears. With the win, Lesnar maintained his 370-day reign as a Universal champion.

Legend Undertaker also returned to the wrestling ring to thrash John Cena. The match between these two lasted for only four minutes. Undertaker dispatched the 16-time world champion Cena, leaving the fans stunned after what had transpired in front of their eyes.

Former UFC champion Ronda Rousey made her long-awaited debut at Wrestlemania 34 and she showed everyone what it took to make the transition to professional wrestling. Rousey and Kurt Angle defeated Stephanie McMahon and Triple H. The match concluded with Triple H attempting to powerbomb Rousey, only for Rousey to counter the move with a hurricanrana.

Another surprise in New Orleans was Jinder Mahal. The Modern Day Maharaja reigned supreme over Randy Orton, Bobby Roode and Rusev to lift the US Championship -- his second title in the company.