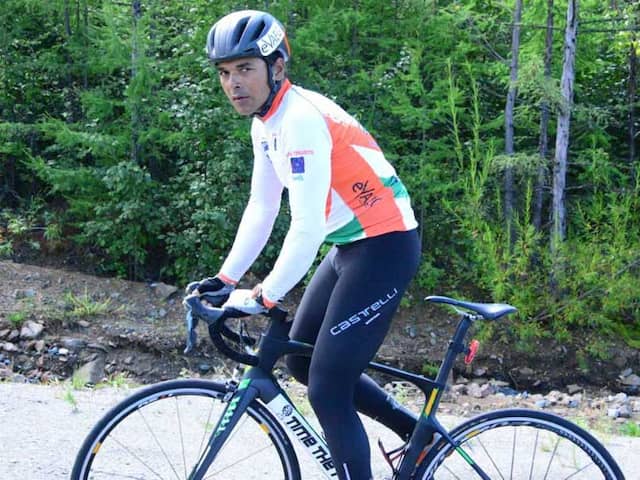 The Tour de France is the first event that comes to mind when you think of endurance cycling. But it is the Trans-Siberian Extreme (TSE) race that is considered to be the most difficult cycle race in the world, as it is thrice the length of the Tour de France. What makes this race more prestigious is that participation in this race is by invitation only. Till last year, no Asian had ever finished on the podium but this time Dr Amit Samarth of Nagpur pedalled his way through the competition and created history.

Talking to NDTV, Samarth highlighted what it was like to compete in this race and what struggles one has to go through during the race. The TSE race covers 9100kms from Moscow to Vladivostok and is to be completed in 25 days in 15 stages and it takes you through seven different time zones.

"When I started the race in Moscow, I was 2.5 hrs behind India time (IST) after 25 days and when I reached Vladivostok I was 4 hours ahead of India time. This bike race is not about cadence, heart rate and power meter. You need truckloads of guts and determination. You need a mind to sit on the bike for 30 hours, 40 hours and sometimes 60 hours to get through every stage," Samarth said.

"It is a test of your physical and mental strength. Cycling 9100 km in 25 days is just a tool to demonstrate your endurance and power of the mind. You will need to have a long, big conversation with your own self on the bike to get through these distances," Samarth added.

Talking about his preparations Samarth said, "To ride massive distances like 5000 km in the Race Across America (RAAM) or 9000 km in the TSE, all you need is an empty mind. If you make too many calculations or thinking, it is not possible to sign up for races like RAAM or TSE and not even train. Words can be the biggest motivators."

The total elevation gained during the race is 77,321 meters which is almost equal to climbing Mount Everest nine times.

The weather in the TSE makes the race all the more challenging. When the race gets organised, it is summer in Siberia. In the initial 5 stages, it is really hot in the daytime but the temperature at night becomes comfortable.

However, from stage 6 onwards, the weather starts to become very cold in the night, with temperatures going down to 2 to 3 degree Celsius and sometimes it also falls to zero.

Apart from that, it can become very foggy at night and during early mornings that results in poor visibility and reduced average speed.

"In the night, I used to listen to the music. Songs were generally from sports movies like Chak de India, Dangal, Bhag Milkha Bhag and many other such movies. Another big favourite was the music from the movie Baahubali. Music helped me to keep awake and kept the pedals moving at a faster cadence," Samarth recalled.

"Then many times I used to think about my son and family because I had promised them of a successful finish. Some of my friends told me that it will be impossible for me to land in Nagpur (hometown) if I don't get this race done successfully," Samarth further added.

Before completing the TSE, Samarth had already completed the RAAM. Now, he has the distinction of being one of two cyclists in the world to have completed both the RAAM and TSE.