A Sale Of NASCAR Was Once Unthinkable, But Now It May Be Overdue

However shocking, a sale of NASCAR may be inevitable. It may be overdue. And amid the sport's precipitous decline, it may be the only way forward. 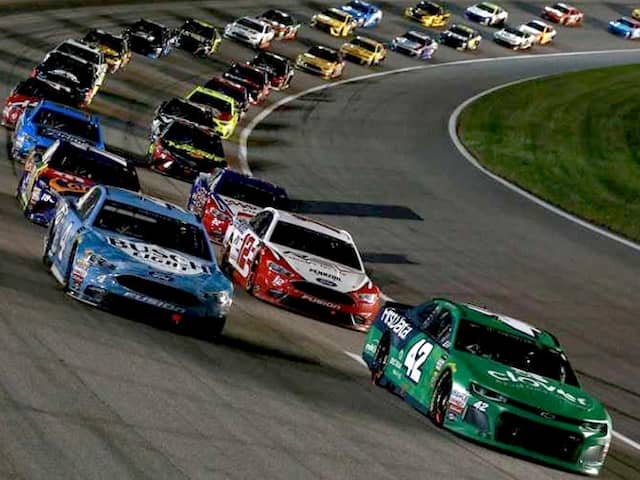 NASCAR's television ratings are on a decade-long downward trend.© AFP

Just a decade ago, going to a NASCAR race meant an hours' long ordeal in traffic, idling amid the exhaust fumes of miles and miles of campers, pickup trucks and sedans. For stock-car racing fans, the price was well worth it to celebrate the distinctly American, high-octane thrill of side-by-side battles at 200 mph and the prospect of hair-raising crashes and photo finishes. Race-day traffic jams today are minor backups. At Richmond Raceway in Virginia, grandstands that once held 112,000 have been slashed in half, and other tracks have aggressively downsized so broadcasts don't show large swaths of vacant bleachers. Television ratings are on a decade-long downward trend; this year's Daytona 500 was the lowest rated on record. And last November, Dale Earnhardt Jr., the sport's 15-time most popular driver, followed superstars Jeff Gordon and Tony Stewart into retirement.

Now, the specter of a sale hangs over the sport. Not the sale of a single struggling racetrack or cash-strapped race team, but the sale of NASCAR itself.

It would have been unthinkable for an enterprise that just a decade ago was hailed as the country's fastest growing sport - a sport that seemed poised to join the NFL, NBA and Major League Baseball in the major league ranks. But according to a Reuters business report last week, NASCAR's owners are working with the investment bank Goldman Sachs to explore a potential sale of the privately held company.

NASCAR officials have declined to comment. But several well-placed insiders say they have little doubt the France family, which owns the sport, is testing the marketplace.

"I think [NASCAR CEO] Brian [France] would have come out with a big denial if it was not true, and he hasn't denied it," noted Felix Sabates, a longtime NASCAR team owner based in Charlotte, North Carolina.

However shocking, a sale of NASCAR may be inevitable. It may be overdue. And amid the sport's precipitous decline, it may be the only way forward.

What separates NASCAR from major league stick-and-ball sports isn't simply Goodyear tires and 850-horsepower engines. Despite the acronym that suggests a consortium of individual team owners that hires a commissioner to run it (akin to the NFL and NBA), the National Association for Stock Car Auto Racing is a family business owned entirely by the billionaire descendants of the late Bill France, who ruled it from 1948 on with an iron fist. His son Bill France Jr., regarded as a slightly more benevolent dictator, built NASCAR into a behemoth with the help of R.J. Reynolds Tobacco Company's marketing wizardry in the 1970s, '80s and '90s. And the sport reveled in runaway growth and a coast-to-coast expansion under third-generation CEO and chairman Brian France, who took the reins in 2003.

But in business, dynastic wealth tends to have a life span illustrated by the Chinese proverb, "Wealth never survives three generations," which has been borne out across cultures and over time. In the case of NASCAR, however, plenty of wealth will survive if its third-generation owners cash out.

No one knows how much NASCAR is worth, how hefty its profit margin or even who controls its privately held stock. It's also unclear whether International Speedway Corporation, the family's publicly traded track-owning arm (which owns 13 tracks on the NASCAR circuit), would be included in a sale.

Following the 2007 death of Bill France Jr., NASCAR's principal owners were reportedly his two children, Brian and Lesa France Kennedy, and their uncle (France's brother), James France. According to media reports and confirmed by a motor sports executive who did not want to be identified because of the family's insistence on privacy, Brian France sold 100 percent of his shares to his sister and uncle in 2004 or 2005, using Goldman Sachs to set the value, though he has remained chairman and CEO. He may have acquired additional NASCAR shares following the 2016 death of his mother, Betty Jane France, who left her estate equally to her children, according to the Daytona Beach News-Journal.

How much is NASCAR worth? There is no established, comparable market. In the NFL, the sale of one team partly establishes the value of every other team, which is why 31 league owners have to love that the Carolina Panthers are expected to be sold for about USD 2.2 billion.

The closest "comp" to NASCAR would be Formula One, which the U.S. media conglomerate Liberty Media (which also owns the Atlanta Braves) bought in 2016 for a deal valued at USD 8 billion, including debt.

Sabates, who also owns a stake in the NBA's Charlotte Hornets and explored buying the Panthers, believes NASCAR would sell for much more - estimating the price as high as USD 25 billion if ISC's racetracks were part of the transaction.

Formula One enthusiasts would blanch at the notion, given that its form of racing far outstrips NASCAR in panache, technological sophistication and global brand recognition. But Formula One is a nominal player in the United States, which is where NASCAR cashes in.

As stock-car racing's sanctioning body, NASCAR has few expenses, little overhead and, essentially, a license to print money. It collects fees from every entity it touches - chief among them, television (its current TV deal with Fox and NBC, which expires in 2024, is worth $6.8 billion). That revenue is shared with track owners and drivers. NASCAR also collects money from official sponsors and corporate partners that pay to associate with the brand. Track owners pay fees to host races. Team owners pay fees to enter events (reportedly $2,300 per car, per race). Drivers and crew members must buy annual licenses. And fans pony up for official NASCAR merchandise and souvenirs.

Apart from any value set by an investment bank, a prospective NASCAR buyer would also want to determine the unknowable. Can stock-car racing reclaim its peak audience of a decade ago? Will it ever boast nationwide appeal, or is its future as a niche sport? What is its growth potential in Mexico? In South America?

"You have to have the vision to think big and think long-term," Sabates said, ruminating on the value. "NASCAR, at any price, is a jewel for a broadcasting company or cable company. It's the jewel of all jewels in motor sports."

At its peak, NASCAR thrived on close-quarters racing and the cult of personality - Richard Petty, the sport's anointed "King;" the late Dale Earnhardt, whose black No. 3 Chevy was as menacing as he; and telegenic Jeff Gordon, the California phenom with national appeal. With fans passing on their allegiance to their children, a new form of Sunday worship exploded across the South. And by the time the third-generation France took over, NASCAR's stars were millionaires who hopped from one race to the next in private jets, and track owners were adding grandstands as fast as concrete could cure.

The death of Earnhardt, the equally revered and reviled seven-time champion, in a last-lap crash in the 2001 Daytona 500, gutted the sport's soul, in the eyes of many devotees. While today's drivers surely have personalities, too, the corporate imperative of pitching sponsors' products at every turn tends to sublimate them, turning would-be stars into inoffensive pap.

A radical redesign of the racecars, ushered in with the highly touted "Car of Tomorrow" in 2007, made the sport safer but blurred the distinction between Fords and Chevrolets, the hot-button rivalry that stoked many fans' passions. The same year, traditionalists railed against NASCAR's decision to drop its age-old rule restricting competition to "American-only" cars, deriding the entry of Toyota's Camry as a "rice rocket." More recent tweaks to all cars' specifications have kept them from taking flight during high-speed pileups, as intended, but resulted in too much single-file racing.

"Now they've got the difficult task of trying to make people interested in the racing again, and it's a bit of a [single-file] parade," noted sports marketing executive Max Muhleman, who devised the strategy that landed Charlotte's expansion-team Hornets and Panthers. "That's a major problem: Is it fun to watch?"

Over-exuberant expansion - "greed," by another name - proved another downfall. Eager to conquer major media markets in the go-go 1990s, NASCAR let track owners shutter storied venues in North Carolina to erect superspeedways in Dallas, Las Vegas and Los Angeles. In doing so, the France family alienated the sport's core fans only to find that the new fans it coveted were fickle, willing to sample stock-car racing on a lark but hardly converts to the earsplitting, gas-guzzling spectacle.

In the process, the sport squandered its "brand identity," as former NASCAR executive Ramsey Poston views it.

"They were hoping to introduce NASCAR into new markets without this Southern stigma, and I think that was a mistake," said Poston, now president of Tuckahoe Strategies, a Washington-based communications firm. "Think about Harley-Davidson and Jack Daniels; they've been successful everywhere they go because they never gave up on their outlaw branding. Jack Daniels never apologized for being from Tennessee; they owned it. That's what made them interesting to new markets."

The trouble was compounded by NASCAR's refusal to pare inventory - whether trimming its 36-race schedule or shortening individual races to keep the excitement up. Instead, the sport tinkered endlessly with the product - ginning up a "postseason," toying with the points structure and chopping races into segments to ensure periodic drama over three-hour broadcasts.

Much like the U.S. housing bubble of the era, it went pop.

"We got too fancy and messed it up," veteran NASCAR promoter H.A. "Humpy" Wheeler said in a 2014 interview.

To be sure, factors beyond NASCAR's control were at play - chief among them, the economic downturn of 2008 that hit its fans hard. While much of the country rebounded in the aftermath, many stock-car racing fans stayed home. That, in turn, led deep-pocketed corporate sponsors, the lifeblood of NASCAR, to downsize their financial commitment or abandon the sport entirely. Also working against NASCAR is young Americans' shift away from a "car culture," leaving the sport with a fan base that's not only declining in numbers but aging.

NASCAR officials insist their audience is bigger than race-day attendance (still larger than typical major league baseball crowds) and TV ratings indicate, pointing to robust social-media data and explaining that millions of fans follow the sport on their phones or other platforms.

Sabates faults the media for exaggerating NASCAR's downturn. "The press is always looking for a reason to slam anybody," he says. As a businessman, he also thinks the Frances are wise to explore a potential sale. "I'm sure the phone has been ringing at Goldman," said Sabates, who believes a major media company such as Alphabet (Google), Comcast or Disney - each with more than $50 billion in revenue - would see value in NASCAR.

"I don't think racing in America goes away," he said. "I think there will always be an appetite for 'Who can go fastest?' and 'Who will be first?' Someone will figure this out, and it may well be the France family. But the current path is not sustainable."