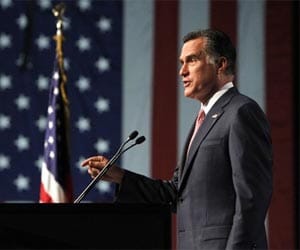 Every four years, the five-ring summer Olympic circus unfolds alongside the one-ring brawl of the White House race, in a volatile mix of flag-waving patriotism and rare national unity ripe for political exploitation.

This year, Romney's dancing dressage horse, gymnastic heroines from swing states and the tax woes of gold medalists have stolen the headlines -- during Olympics broadcasts peppered with 2012 campaign ad blitzes.

Given the quadrennial synergy of Olympics games and elections it is not surprising campaigns scent political opportunity.

But Olympic politics can be treacherous too, and several presidents have been tested by Games darkened by global tensions.

This year, President Obama has taken to starting campaign events with praise for the latest triumphs of American Olympians in London.

In Virginia on Thursday, he led a bombastic chant of "USA, USA" and has enjoyed his official duty of telephoning gold medal winners like wonder swimmer Michael Phelps. He is also bursting with national pride at US gymnasts.

"I do not understand how, on this little balance beam, you're flipping around. I don't get that," Obama said.

The sports-mad president also gave a shout out to "Flying Squirrel" double gold medal gymnast Gabby Douglas -- who just happens to be from Virginia, a swing state that could help Obama to a second White House term in November.

On Saturday, in his weekly address, Obama noted that in the Olympics, a bitterly divided nation could find common ground.

"These games remind us that for all our differences, we're Americans first," he said.

For a president who has faced fringe charges of not being an American at all, wrapping himself in the Stars and Stripes is a no-brainer less than 100 days before election day.

First Lady Michelle Obama also has an eye for a photo-op. She led the US delegation to London opening ceremonies and was pictured draping NBA superstars on the US basketball "Dream Team" in hugs.

For Republican Romney, the Olympics should have offered an easy political win.

He is renowned for rescuing the Salt Lake Winter Games in 2002, after a corruption scandal, winning a reputation as a clever turnaround artist.

But the Republican stepped on his own lines last week in an interview with NBC, questioning Britain's preparation for 2012 which ignited a political firestorm.

It was not the only Olympic embarrassment for Romney, who is painted by Democrats as an out-of-touch rich man.