Mums are on the march at the Olympics gymnastics competition, determined to make their mark on a sport long associated with elfin, pre-pubescents. 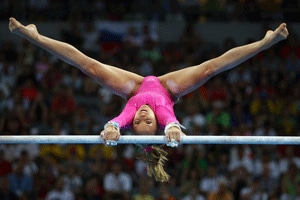 Mums are on the march at the Olympics gymnastics competition, determined to make their mark on a sport long associated with elfin, pre-pubescents.

Whether they are in their twenties, like Catalina Ponor, or Oksana Chusovitina, now well into her thirties, the London Games medal battle will take on a more mature look.

The mother of a 13-year-old boy, 37-year-old Chusovitina stands out in a sport which has often battled accusations that passports have been falsified to allow girls under 16 to take part.

Chusovitina, born in Uzbekistan but now representing Germany, won her first medal at the 1992 Olympics in Barcelona, before many of her London rivals were even born.

She then won a silver at the 2008 Olympics, followed by two more silvers at the world championship in 2011 and 2012 European finals.

The London Olympics will be her sixth and last Games.

"If someone had told me that at the start, I would have cracked up laughing. Now that it is happening, it gives me great pleasure," said Chusovitina, who switched her allegiance to Germany in 2000 after moving to the country to get treatment for her cancer-stricken son.

Romanian star Ponor, 25, who won three titles at the 2004 Athens Olympics, has returned to the sport after four years in retirement, buoyed by having already won two gold at the Europeans in May.

"Perhaps everybody was surprised, but not me," said Ponor.

"I missed all of this -- the top step on the podium, the adrenalin, the emotions, all those things you feel when you are competing.

"When I stopped, there was no problem in my head, it was because of problems with my back. Now I feel a lot stronger."

Romanian coach Octavian Belu believes the more mature gymnasts have a major role to play in the Olympics.

"There is a place for older girls because the younger ones are not good enough to dislodge them from the podium," said the coach.

"We have seen that with Oksana Chusovitina."

Despite his predecessor Nicolae Forminte believing that the minimum age rule of 16 was an obstacle to the make-up of a strong squad, Belu thinks differently.

"We need our stars to protect the image of the sport," he said.

Meanwhile, Britain's Beth Tweddle, who in 2006 became the first woman in her twenties to win a world title when she triumphed on the uneven bars, now has a chance to become Britain's first Olympic champion in the sport.

The mature look is also fashionable in the men's events.

Bulgaria's Jordan Jovtchev will be taking part in his sixth Olympics, six months shy of his 40th birthday.

"Four medals in five Olympics is already an achievement but like all sportsmen, I dream of ending my career with a medal," he said.

Comments
Topics mentioned in this article Gymnastics Olympics 2012
Get the latest Indian Premier League 2020 news, check out the IPL 2020 schedule, Cricket live score . Like us on Facebook or follow us on Twitter for more IPL 2020 updates. You can also download the NDTV Cricket app for Android or iOS.
Related Articles