Love match on the beach

Beach volleyball is known for its glamour quotient but it also turned out to be the perfect backdrop for a marriage proposal when a British amateur player went down on his knees on the court to propose to his girlfriend. 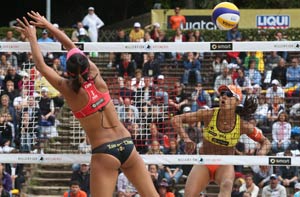 Beach volleyball is known for its glamour quotient but it also turned out to be the perfect backdrop for a marriage proposal when a British amateur player went down on his knees on the court to propose to his girlfriend.

A boisterous crowd of 15,000 cheered in appreciation as Elfi Czingeova of Slovakia nodded in agreement to Tom Holt's marriage proposal soon after the Italy-Spain women's match at Horse Guards Parade.

Holt and Elfi, both in their early 30s, are amateur volleyball players and turn out for Adur Volleyball Club in the English Beach Volleyball League.

"We both live and breathe the sport, so it made sense to me. I planned it ages ago. I was very nervous. You don't want to be rejected in front of thousands of people. But I was pretty confident, although you can never be 100 per cent certain," said Holt, who works as a sales account manager in Brighton.

During the event, Holt gave a note to the stewards, who passed it on to the announcers. After the match ended, the announcer called the couple on the sand and gave a microphone to Holt for making the proposal.

"I didn't have any idea what was going to happen or why we were out on the sand. Then he dropped on his knees and I was really nervous. I got really emotional and tears came to my eyes and I started shaking," said Elfi, an executive of a company that makes mobile phone cases.

The couple plan to marry next summer.

Just a few months before the London Games, her mother had filed for bankruptcy, but after becoming the first black gymnast to win the individual all-around gold medal, a rich fortune awaits US Olympic superstar Gabby Douglas as a rich haul of endorsements await her.

An American celebrity website had reported that a few months before the start of the London Olympics, Natalie Hawkins, mother of Gabby, had filed for bankruptcy.

However, with Gabby's new found fame and the potential to make a fortune through endorsements, it's likely her mother will never have to worry about bankruptcy or money problems ever again.

Experts have estimated the Olympic golden girl could bring in up to $10 million in endorsements over the next few years.

Gabby's girl-next-door image could attract a variety of brands, from shoes and make-up to toothpaste and cars, analysts said.

Kellogg's was quick to pounce, putting the golden girl on corn flakes boxes just hours after the gymnast claimed the all-around title.

Gabby amazed crowds and judges in London during her gymnastic event with gravity-defying moves on the balance beam and vault, living up to her nickname, "the flying squirrel".

The youngest, the oldest and the pregnant

The London Olympics already has its share of the first and the odd, the prominent ones being:

*On the first day of competition, Nur Suryani Mohammed Taibi proved that being eight months' pregnant is no bar to competing. The 29-year-old 10-metre air rifle shooter from Malaysia finished 34th overall, shooting 392 targets out of 400.

*Saudi Arabia's 16-year-old judoka Wojdan Shaherkani became the first woman to compete for her country at the Olympics. She was defeated by Melissa Mojica of Puerto Rico. She also made news by getting permission to wear the hijab while performing.

*Swimmer Adzo Kpossi from Togo at 13 became the youngest athlete in the 2012 Olympics. She competed in the 50m freestyle and finished 72nd in a field of 73 swimmers. In spite of her failure to reach the minimum standard required to secure a place at the Olympics, she made it courtesy a wildcard.