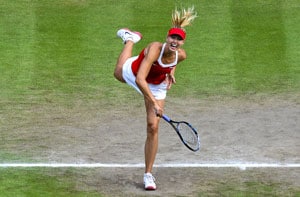 Sharapova will play the 14th seed for a place in the final at Wimbledon after ending Clijsters's hopes of a medal in her penultimate tournament before retiring for the second and final time after the US Open.

"My previous matches against Kim have been quite difficult. I had so many opportunities to win in the past and I knew I had to step up today and stay extra focused," Sharapova said.

"She's such a tough competitor. I knew I needed to play at a high level to beat her and I was happy that I did that.

"The Olympics are so different, obviously very unique, and to have a chance to get to the final, that's what it's all about."

French Open champion Sharapova and former world number one Clijsters have eight Grand Slam titles between them, but both were competing in their first Olympics and they have been relishing the experience.

Clijsters had advanced to the last eight without dropping a set, so this was a frustrating way to say farewell to the All England Club, but she could have few complaints after being overpowered by Sharapova on Centre Court.

"I didn't have many chances and overall she was the better player," Clijsters said.

"Of all the matches I've played against her this is the best that she's served, and on grass it's going to be tough to beat her.

"But it was great. It's a nice experience every time you go out on Centre Court so I'm happy to say that my last match at Wimbledon was on Centre Court."

The 29-year-old made a sloppy start as a double-fault on break point in the opening game gifted Sharapova the lead.

Clijsters broke back to level at 2-2 but Sharapova delivered a ruthless response as she won the next four games, breaking twice, to take the set in stunning style.

When Sharapova landed an early break in the second set, it looked all over for Clijsters.

The Belgian refused to buckle and broke back to level at 3-3, but Sharapova wasn't in the mood to be subdued and one last break at 5-5 was enough to end Clijsters's resistance.

Comments
Topics mentioned in this article
Tennis Kim Clijsters Olympics 2012 Maria Sharapova Maria Kirilenko
Get the latest updates on ICC T20 Worldcup 2022 and CWG 2022 check out the Schedule, Live Score and Medals Tally. Like us on Facebook or follow us on Twitter for more sports updates. You can also download the NDTV Cricket app for Android or iOS.