Indian sport and its growing pains

It was very heartening to see senior Indian cricketers following the progress of the Olympic contingent. You could observe it, courtesy Twitter. Yuvraj Singh, in particular, has been on the ball. Among those in action in the One-Day International series in Sri Lanka, Suresh Raina has kept an eye out. Sachin Tendulkar, who is of course on a break, has too. 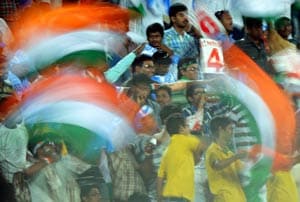 It was very heartening to see senior Indian cricketers following the progress of the Olympic contingent. You could observe it, courtesy Twitter. Yuvraj Singh, in particular, has been on the ball. Among those in action in the One-Day International series in Sri Lanka, Suresh Raina has kept an eye out. Sachin Tendulkar, who is of course on a break, has too.

Speaking of cricket and the Olympics, following the exploits of the Indian boxing team in London reminded me in an odd sort of way of Indian cricket. No, not the hard-punching, gritty stuff some of the fighters have dished out to their opponents - whether in a winning cause or otherwise - but the picture of persecution we as a nation tend to present. Is it our inferiority complex at being by and large a sport-poor nation? Or is it the angry outrage of a victim of bias? I don't know. I empathise only too well with fans that want India to do well and find it tough to digest the fact that, more than occasionally, they will be left disappointed. But perhaps we overdo the patriotism, nay jingoism, in these parts?

The presence of eight Indian boxers at the London Olympics had made this boxing fanatic really, really happy. And, just like most others who can tell a point punch from a non-point punch, I was deeply upset when young Sumit Sangwan was robbed of a first-round win and, worse, the Indian protest was chucked out. To me it was, and still is, outrageous.

But was that a faulty judging process, or was there a deliberate attempt to push the Indian boxer out? I have accepted that it's the former. Many friends, on Twitter and elsewhere, seemed to have accepted it too - until similar controversies vis-a-vis boxers Vikas Krishan and Manoj Kumar cropped up. The outrage was back. But this time, big statements alleging anti-India bias, pro-US bias and pro-Brazil bias accompanied the outrage. It seemed as if a lot of us actually believed that there was a full-fledged wagging of the dog in place to ensure India didn't do well at the Olympics. Historically, Indians haven't needed external help to pull that off.

One prominent Indian English-language news channel even ran a debate centered on the 'Indian cheated off medal' theme after Krishan's loss - no matter that it came in the second round, two fights before a medal would be assured. That too in a fight where the Indian spat out his gumshield - the equivalent of a bowler running on to the danger zone.

All of this brought to mind a debate on a news channel back in 2007, which suggested that Australia had planted Greg Chappell in the Indian team to ensure that they - at the time the closest rivals Australia had - fell behind.

So is this lack of sporting spirit an Indian thing? Or something that media stations drum up to push their ratings? I believe it's the latter, and that we have India's enthusiasm for cricket to thank for it.

Chappell vs Sourav Ganguly. Chappell, for better or worse, never stood a chance. Mike Denness vs the Indian team. I believe Denness messed up, but couldn't it have been incompetence rather than prejudice? Where was the benefit of doubt that must accompany a difficult-to-prove accusation? When Gary Kirsten, who later became a hero, was announced as the Indian team coach, one of the first reports about him featured a diary or blog Kirsten had written on an earlier visit to India, where he cribbed about the bad traffic in cities, cows, filth and more. Racist, we called him.

Matthew Hayden and Andrew Symonds were racists too, as was, to a lesser and lighter extent, Shane Warne because he preferred his baked beans to what he would get on tour in India. It was also racist when Javagal Srinath and Venkatesh Prasad were denied food of their choice on tours abroad. Australian umpires, whether Sunil Gavaskar caught hold of Chetan Chauhan and walked out of the ground or not, were racist too. Pakistani umpires, and Steve Bucknor, a Jamaican, couldn't be branded that because of the colour of their skin. But, of course, they were anti-Hindu or anti-Indian.

The clout India has in the world of cricket has ensured that, more often than not, it has its way when it comes to contentious issues. One of the tweets I saw during the Olympics said, in all earnestness, that India must try to become a stronger presence in Olympic sports governance if it wants to do well at the games. Basically, become the BCCI of every sport. That's the solution being offered. The tweeter was not a layperson, but someone who has been one of the most vocal critics of the BCCI over the years.

The pains of growing up. Not easy, are they? There are several things that other sports can learn from Indian cricket, winning often among them, that we can discuss another time. The constant feeling of being persecuted - no, not that.

Comments
Topics mentioned in this article
Cricket Olympics 2012 Anil Kumble Gary Kirsten Yuvraj Singh Sachin Ramesh Tendulkar
Get the latest updates on ICC T20 Worldcup 2022 and CWG 2022 check out the Schedule, Live Score and Medals Tally. Like us on Facebook or follow us on Twitter for more sports updates. You can also download the NDTV Cricket app for Android or iOS.