All eyes on Usain Bolt-Yohan Blake sprint duel in athletics

The countdown towards what is being hyped as the fastest race in history begins on Friday as the Olympic athletics gets under way with all eyes on the prospect of a thrilling 100m shootout. 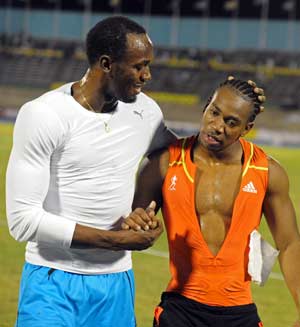 The countdown towards what is being hyped as the fastest race in history begins on Friday as the Olympic athletics gets under way with all eyes on the prospect of a thrilling 100m shootout.

For the first time since the advent of electronic timing, the field for the blue riband event of the Games will comprise the four fastest men in history -- champion Usain Bolt, Yohan Blake, Asafa Powell and Tyson Gay.

Bolt rewrote the record books at the 2008 Beijing Games with a dazzling sprint double that turned logic on its head and forced a recalibration of what had previously been thought humanly possible.

The good news for the London organisers is that the ebullient 25-year-old is back, professing himself ready to mount a successful defence of his 100m and 200m titles from four years ago in his bid to "become a legend".

"I am the Olympic champion and I have to show the world I am the best," Bolt said on the eve of the Games.

The even better news is that he will have a titanic battle on his hands, the first chinks in his armour revealed when he was beaten in both the 100 and 200m in the Jamaican Olympic trials by training partner Blake.

"My philosophy is that the sky's the limit," Blake said. "I've always wanted to be at the Olympics. It's everyone's dream.

"I've got no message for Usain Bolt. He's a good guy. I'm not focusing on Usain."

Other rivals in the 100m will likely be another Jamaican, Powell and the Americans, Gay and Justin Gatlin.