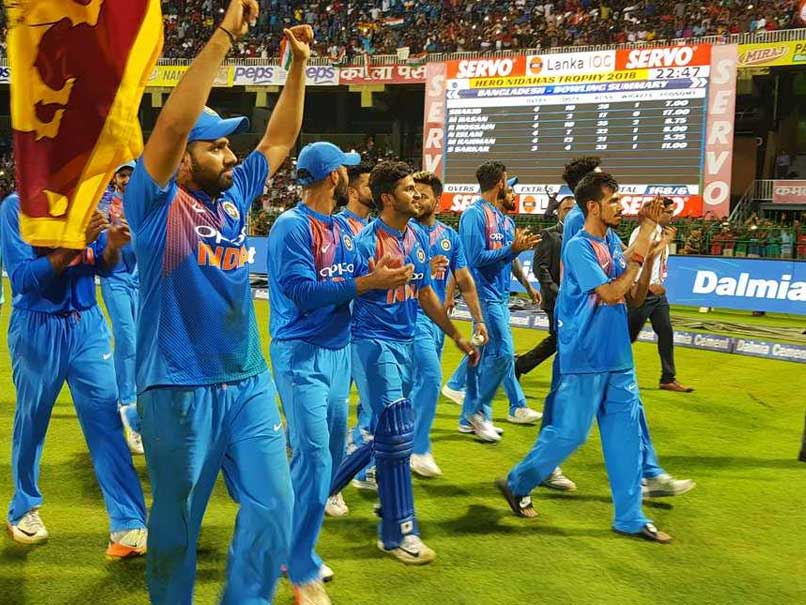 Dinesh Karthik on Sunday hogged all the limelight as the wicket-keeper batsman hit a last-ball six to power India to a four-wicket win over Bangladesh in a nerve-wracking Nidahas Trophy final at R. Premadasa Stadium in Colombo. The Nidahas Trophy T20 tournament, featuring Sri Lanka, India, and Bangladesh, was organised to celebrate the 70th anniversary of Sri Lanka's independence. After the nail-biting win, captain Rohit Sharma thanked the Sri Lankan fans at the jam-packed stadium as he waved a Sri Lankan flag while taking a lap of honour.

End of the day, Its nice to see Rohit Sharma carrying Srilankan Flag around #NidhasTrophy#INDvBAN pic.twitter.com/oDNVoMXOGC

This one too ! Rohit Sharma waving Sri Lanka flag for a while pic.twitter.com/Hz7DgpHq59

Karthik came to the crease when India's scoreboard read 133 for 5. The 32-year-old announced his arrival at the crease through two sixes and a four in first three balls which narrowed the gap between remaining balls and required runs.

The drama unfolded in the last over when India needed five runs in the last ball. Karthik slammed a flat six over extra cover to gift a memorable win to India.

His cameo got Karthik 29 off 8 balls with two boundaries and three sixes -- the last of them which will forever be etched in the memory.

Comments
Topics mentioned in this article
India Cricket Team Bangladesh Cricket Team Rohit Sharma Dinesh Karthik Nidahas T20 Tri-Series Cricket R.Premadasa Stadium, Colombo
Get the latest updates on T20 World Cup, check out the T20 World Cup Schedule and Live Score . Like us on Facebook or follow us on Twitter for more sports updates. You can also download the NDTV Cricket app for Android or iOS.