In a video posted by BCCI, Bharat Army composed a song for Chahal TV, where Yuzvendra Chahal is seen in action on bcci.tv. 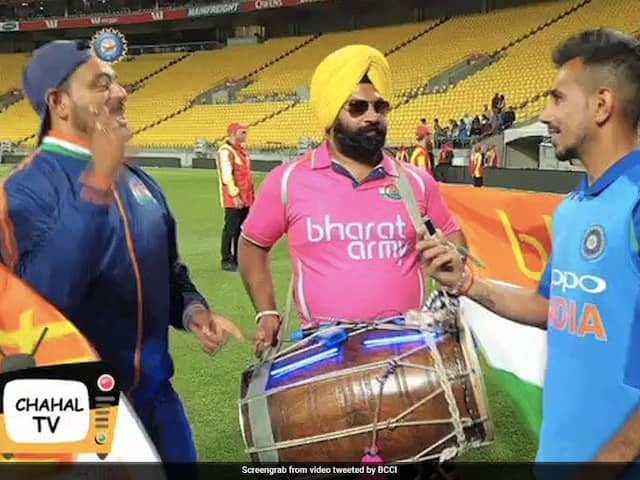 Yuzvendra Chahal's online show, Chahal TV, is making everyone go bonkers. The latest name to appear on the show is Bharat Army. The segment proved to be quite entertaining as the group composed a soundtrack for online show that has had stars such as Rohit Sharma, Virat Kohli, Kuldeep Yadav appear for banter's sake. BCCI took to Twitter to say, "MUST WATCH: Meet the bunch that support #TeamIndia everywhere they go. Say Hello to The Bharat Army - by @RajalArora P.S. Let us know how you find Bharat Army's original "Chahal TV soundtrack" @yuzi_chahal"

MUST WATCH: Meet the bunch that support #TeamIndia everywhere they go. Say Hello to The Bharat Army - by @RajalArora

Bharat Army pulled this off soon after India clinched the fifth and final ODI against New Zealand to win the series 4-1. India outclassed the Kiwis by 35 runs at the Westpac Stadium to clinch the series on Sunday. Spinner Yuzvendra Chahal claimed three wickets as India bundled out New Zealand for 217 in 44.1 overs. James Neesham top-scored for the hosts with 44 runs off 32 balls.

Earlier, Ambati Rayudu anchored Indian innings after early blows to help the visitors post 252, after opting to bat, in Wellington.

India had won the three consecutive ODIs in Napier and Mount Maunganui, while New Zealand registered a consolation win in the fourth ODI in Hamilton. At 18 for four, India were heading towards another sub-100 total before Ambati Rayudu (90 off 113) and Vijay Shankar (45 off 64) forged a 98-run stand to ensure India ended with a fighting total.

Yuzvendra Chahal Cricket New Zealand vs India
Get the latest Cricket news, check out the India cricket schedule, Cricket live score . Like us on Facebook or follow us on Twitter for more sports updates. You can also download the NDTV Cricket app for Android or iOS.