Smriti Mandhana scored a 24-ball half-century, fastest by an Indian woman, in the first T20I against New Zealand women. 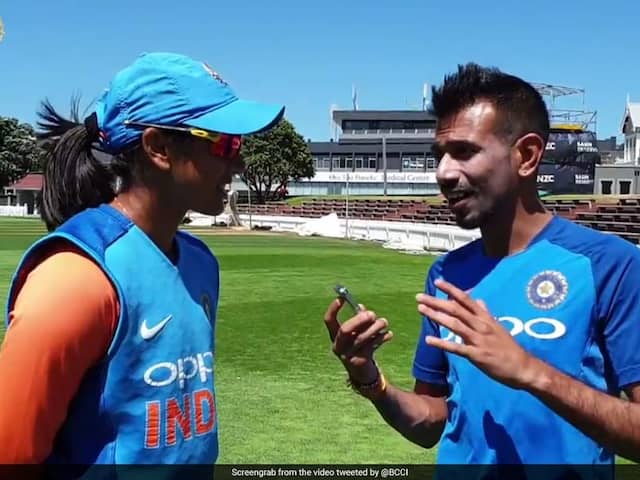 Smriti Mandhana smashed a 24-ball half-century, fastest by an Indian woman, in the first T20 International against New Zealand in Wellington on Wednesday. However, India women lost the three-match series opener by 23 runs at the Westpac Stadium. Later at the same venue, the men's team also suffered a loss in the 1st T20I, an emphatic 80-run defeat to go down 0-1 in the three-match series. Following the matches, Smiriti Mandhana was featured on Chahal TV, a chat show hosted by Indian spinner Yuzvendra Chahal. Smiriti Mandhana thanked Chahal for inspiring her with his fearless batting in the fourth One Day International in Hamilton on January 31.

World No 1 batter makes her debut on Chahal TV@mandhana_smriti has been taking her batting inspiration from this leg spinner. Find out who it is in this fun segment of @yuzi_chahal TV - by @RajalArora

"After watching you bat in the fourth ODI, I was inspired to develop my game. You're my batting inspiration," Mandhana said in the video.

Chahal had top-scored for India in the fourth ODI with 18 runs (not out). He struck three boundaries in his 37-ball knock.

After being asked to bat, India were bowled out for paltry 92 runs in 30.5 overs with seven of their batsmen dismissed for a single digit score.

New Zealand chased down the small target in 14.4 overs with eight wickets in hand. However, India won the fifth and final ODI by 35 runs in Wellington to clinch the five-match ODI series 4-1.

Mandhana explained her mentality while batting and jokingly claimed that it's different from bowlers like Chahal.

"My batting mentality is to see the ball and hit it. I don't know what bowlers see while batting," she said.

India women, who won the three-match ODI series 2-1, will look to level the T20I rubber when they face New Zealand women in the second T20I in Auckland on Friday.

Under the captaincy of Rohit Sharma, the men's team will also take on New Zealand at the same venue following the women's match.

Yuzvendra Chahal Smriti Mandhana New Zealand vs India Cricket
Get the latest Cricket news, check out the India cricket schedule, Cricket live score . Like us on Facebook or follow us on Twitter for more sports updates. You can also download the NDTV Cricket app for Android or iOS.