Gujarat made it to their second consecutive Pro Kabaddi League final, where they face Bengaluru Bulls. 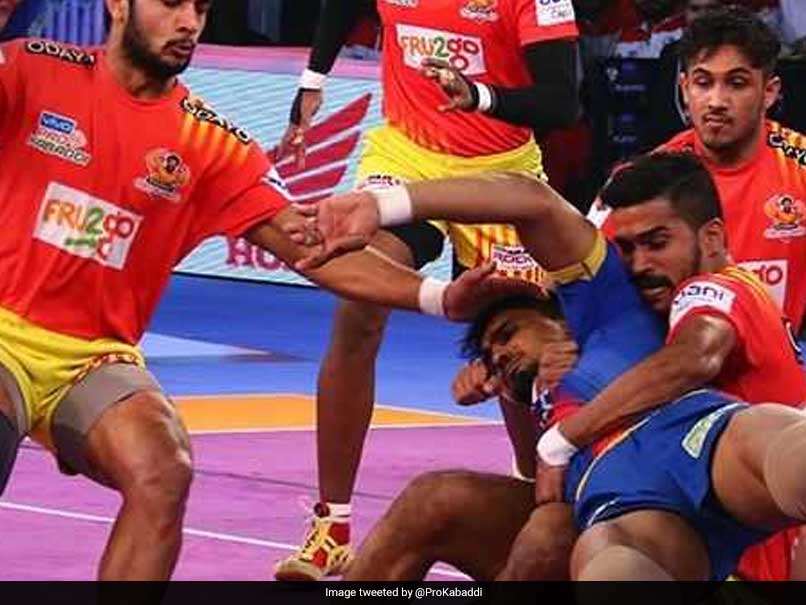 The Pro Kabaddi League final will be held on January 5.© Twitter/@ProKabaddi

Gujarat Fortunegiants overcame a late resurgence from UP Yoddhas to beat them 38-31 in the second qualifier on Thursday and make it to their second consecutive Pro Kabaddi League (PKL) final where they face the Bengaluru Bulls in Mumbai on Saturday. Captain Rishank Devadiga turned out to be the handicap for the Yoddhas as the star raider failed to rise to the occasion in the do-or-die clash at the NSCI Indoor Stadium. Srikant Jadhav led the Yoddhas fightback with seven points while Nitesh Kumar and Prashanth Kumar Rai got six and five points, respectively.

For the Gujarat franchise, raider Sachin was the top scorer with 10 points while K.Prapanjan scored five while captain Sunil Kumar, Hadi Oshtorak and Sachin Vittala got three points apiece.
Sachin got Gujarat the early lead before a two pointer raid from Prashanth Kumar Rai reversed the scoreline to 2-1 in favour of the UP Yoddhas after the initial couple of minutes.
Gujarat got their lead back to 4-2 by the eighth minute before Shrikant Jadhav scored a touch point in the do or die raid to cut the slender deficit for the UP side.

The pendulum shifted either way with both the sides stealing a couple of bonus points before Gujarat's K.Prapanjan was super tackled twice, which helped the Yoddhas square the scores at 11-11.
But minutes before the end of the first half, the Gujarat side bounced back in style by inflicting the first All Out of the match to stretch their lead to 19-14 at the breather.

Coming back, Gujarat rubbed salt into the hapless UP Yoddhas' wounds by immediately inflicting another All Out and double their lead to 28-14 with merely 15 minutes to go.

Dejected but not the ones to give up easily, the Yoddhas managed a couple of points in the next few minutes, thanks to Prashanth stealing a bonus point as the scoreline read 16-30 before extending it further to 22-32.

The Yoddhas continued their strong comeback by inflicting their first All Out that further swelled their score to 27-34 and went on to add a few more.

But with time running out of UP's hands, and Gujarat preferring to play the waiting game with a slender lead, the match ended in favour of last season's runner-up side 38-31.