Meraj Sheykh was the star for Delhi as he produced a super raid in the last minute to lead them to a win. 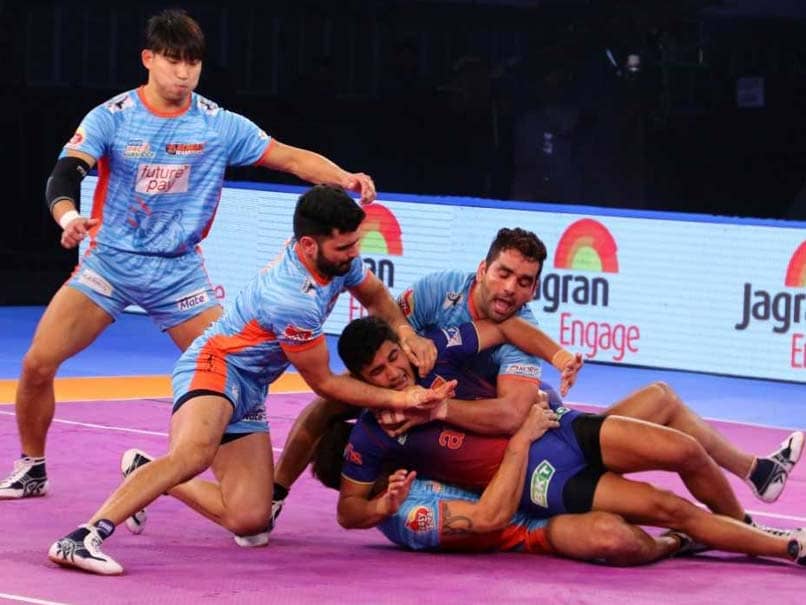 Bengal Warriors unbeaten run in their home leg came to an end as they lost 31-37 to Dabang Delhi in the Pro Kabaddi League in Kolkata on Sunday. Meraj Sheykh (13 points) was the star for Delhi as he produced a super raid in the last minute to lead them to a win. Maninder Singh top scored for Bengal Warriors with 9 points. Both teams have already sealed a spot in the playoffs. Dabang Delhi finished the league campaign with 68 points from their stipulated 22 matches.

Maninder Singh got the Bengal Warriors off to a flying start with a super raid in the first minute to lead 3-0.

Dabang Delhi recovered from the early shock and fought back to lead 4-3 after four minutes. The first half saw both teams going hard for victory and it was a close affair. Maninder Singh scored with a two-point raid in the 11th minute to give Bengal a 10-8 lead. A costly mistake by the Bengal Warrior's defence levelled the match 10-10 after 12 minutes. Meraj Sheykh helped Dabang Delhi inflict an all out with a two-point raid in the 16th minute. It took Bengal Warriors 19 minutes to score their first tackle point of the match. A laid back defensive performance meant that Bengal Warriors went into the break trailing at 14-20 at half time.

Bengal Warriors made a strong start in the second half. They inflicted an all out and scored 8 points in six minutes to level the match at 22-22 after 26 minutes.

With both teams neck and neck there were a slew of empty raids as neither wanted to commit any silly errors.

In the 33rd minute Meraj Sheykh came up with a two-point raid to give Dabang Delhi a 26-24 lead. Sheykh followed it up with another two-point raid as he completed his super 10 and gave Delhi a 28-24 lead.

Bengal Warriors forced a super tackle in the 37th minute to make it a one-point game.

Bengal Warriors again forced a super tackle in the 39th minute to tie the match at 31-31. Meraj Sheykh produced a super raid in the last minute to win the match for Dabang Delhi.

Comments
Topics mentioned in this article
Kabaddi
Get the latest updates on India vs Australia Series, check out the India vs Australia Schedule for 2020-21 and Ind vs Aus live score . Like us on Facebook or follow us on Twitter for more sports updates. You can also download the NDTV Cricket app for Android or iOS.