Dabang Delhi play out a thrilling 37-37 tie against Jaipur Pink Panthers in Panchkula. 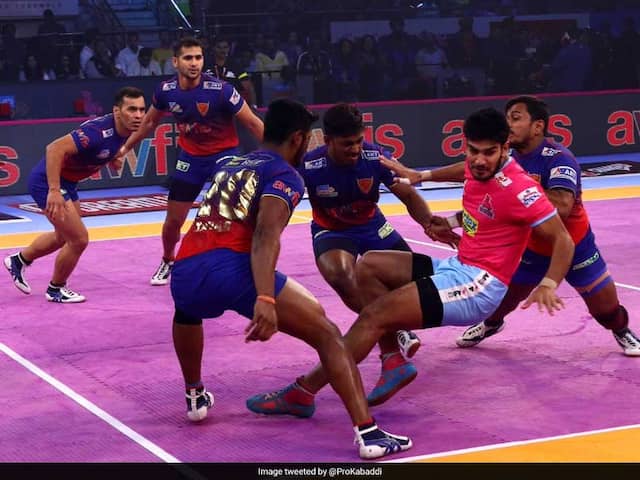 Jaipur Pink Panthers ended their home leg with a 37-37 tie against Dabang Delhi in the Pro Kabaddi League (PKL) in Panchkula on Thursday. Dabang Delhi would feel disappointed as they were in control for most of the match but lost their composure in the last five minutes. Deepak Hooda scored eight points for Jaipur while Sandeep Dhull got a high five. Chandran Ranjit (11 points) and Pawan Kadian (9 points) were among the top scorers for Delhi. Dabang Delhi made a strong start and led 5-0 after four minutes as they picked up a couple of raid and tackle points.

Dabang Delhi took the lead once again as they inflicted an all out in the 11th minute to lead 11-7.

Selvamani's super raid in the 13th minute got Jaipur back in the match once again. It was a see-saw of a match with Jaipur cutting the deficit every time Delhi threatened to run away with the match.

Ajinkya Pawar's two-point raid in the 17th minute made it a one point gap. At the end of the first half Dabang Delhi led 18-17.

Pawan Kadian made a super raid in the 21st minute to give Delhi a 21-18 lead. But Selvamani's brilliant four-point raid in the 24th minute got Jaipur back in the match once again.

With less than five minutes to go Jaipur were trailing by five points when Ajinkya Pawar made a two-point raid to reduce the gap to three.

In the 38th minute Jaipur inflicted an all out as they trailed 35-36 and Deepak Hooda levelled the match in the next minute with a successful raid.