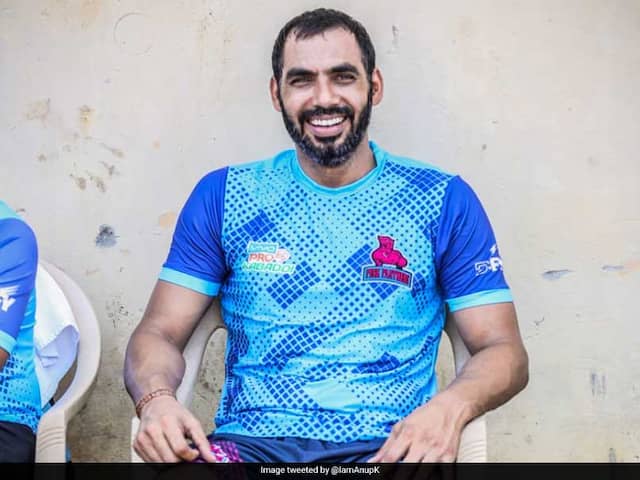 Anup Kumar said he will look to be associated with the sport even after his retirement.© Twitter

Anup Kumar, who led India to Kabaddi World Cup win in 2014 and 2016, announced retirement from Kabaddi before the start of a Pro Kabaddi League (PKL) match between Jaipur Pink Panthers and Gujarat Fortunegiants at the Tau Devilal Sports Complex, Panchkula, on Wednesday. In his 15-year iconic career, Anup Kumar was part of the national team that won gold medals in 2010 and 2014. He was bestowed with the Arjuna Award in 2012.

A veteran in Kabaddi, Anup began his international career in 2006 at the South Asian Games in Sri Lanka. He captained the national team in 2014 and it was during his tenure that the team won 2 gold medals at the Incheon Asian Games in 2014 and the Kabaddi World Cup in 2016.

In season 2 of the Pro Kabaddi League, Anup captained U Mumba and led the team to victory.

Announcing his retirement, Anup said: "I started playing kabaddi because I liked it and it was a great hobby, over the years a hobby became the most important part of my life."

"The day I took to playing kabaddi professionally, I had one dream, to represent my country and bring back a gold medal, I am one of the few lucky people who had the opportunity to accomplish the most important dream of my life."

"Today, with the PKL, the magnitude of the sport has grown leaps and bounds and I could not be happier than to watch and grow and be a part of this journey. This platform is an extremely important aspect of my life and that is why today I use the platform to make this announcement," an emotional Anup added.

Anup further said that he will aim to be associated with the sport even after he hangs his boots.

"Coincidentally, today is also the 10th birthday of my son, and that makes this date even more memorable. Going forward, if there is anything I am confident about, it is knowing that I will always want to be connected to the sport," he said.