Deepak Hooda with eight raid points and Sunil Siddhgavale with eight tackle points were the heroes of the match for Jaipur. 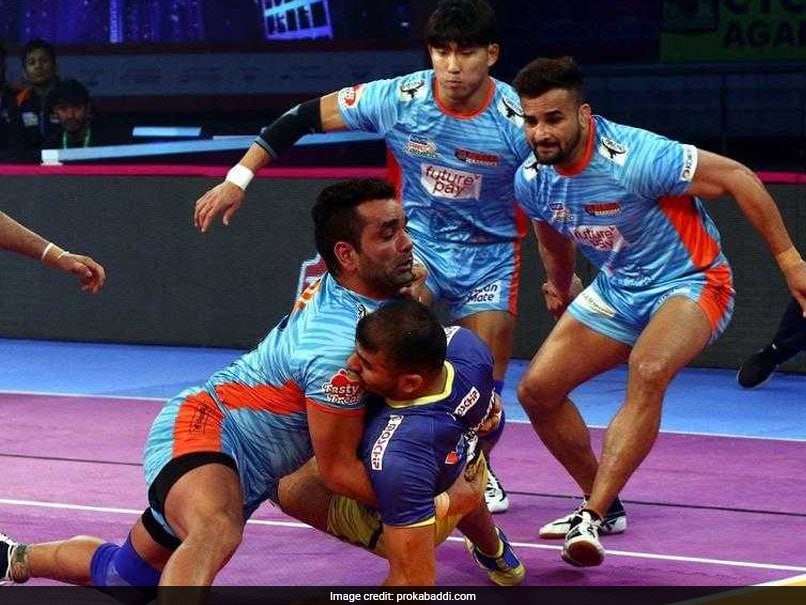 Jaipur Pink Panthers registered a comprehensive win as they beat Puneri Paltan 36-23 in Pro Kabaddi League in Panchkula on Friday. And in the other contest of the day, Bengal Warriors thrashed Tamil Thalaivas 28-21. Deepak Hooda with eight raid points and Sunil Siddhgavale with eight tackle points were the heroes of the match for Jaipur. Puneri Paltan lost their way after the first 10 minutes of the match. G.B. More top scored for Pune with 5 raid points.

Jaipur Pink Panthers still have anoutside chance of making it to the playoffs while Puneri Paltan are not in contention. The first five minutes of the match were evenly contested with both teams trading raid and tackle points. Ajinkya Pawar made a successful raid in the 6th minute to give Jaipur Pink Panthers 5-4 lead. Deepak Hooda made a two-point raid in the 10 th minute as

Jaipur led 9-7. From that point Jaipur Pink Panthers never looked back and left Puneri Paltan behind.

An all out was inflicted by Jaipur as they led 12-7 and were in rampant form. In the next 10 minutes they allowed Puneri Paltan to score just two points as Deepak Hooda led the raid department while Sunil Sidhgavali marshaled the defence. At the end of the first half, Jaipur Pink Panthers held a healthy lead of 12 points with the score 21-9.

Sandeep Narwal started the second half on a brighter note for Puneri Paltan with a two-point raid in the 22nd minute. Jaipur Pink Panthers in full control of the match in the second half as they didn't take any unnecessary risks. With less than five minutes to go, Jaipur led 30-20 and were on course to a comfortable victory.

Puneri Paltan's efforts of making a comeback were thwarted as their raiders just couldn't pick up
enough points.