Bengal Warriors after registering a win against Tamil Thalaivas remain in contention for a place in the playoffs. 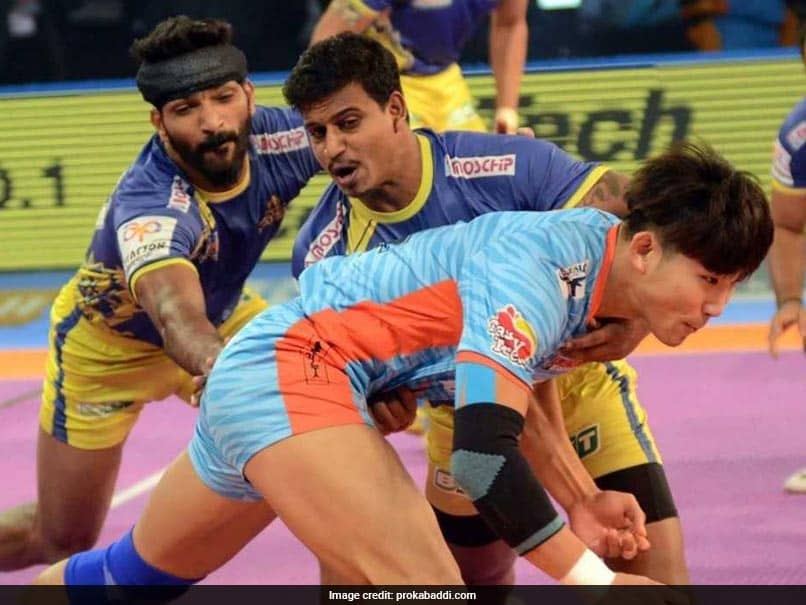 Bengal Warriors started their home leg with a bang as they defeated Tamil Thalaivas 27-24 in the sixth season of the Pro Kabaddi League in Kolkata on Friday. Jang Kun Lee was the star of the show for Bengal Warriors and top scored with 12 points. Ran Singh marshalled the defence for the Warriors and scored four tackle points. Sukesh Hegde top scored for the Thalaivas with 9 points and was ably supported by Ajay Thakur. In the absence of Manjeet Chhillar, Bengal Warriors' defence couldn't contain the Bengal raiders and scored just six tackle points.

Bengal Warriors remain in contention for a place in the playoffs while Tamil Thalaivas were knocked out earlier.

It was a closely fought first half with both teams' raiders getting points. For the defenders, it was a low-scoring affair as only five tackle points were scored.

Jang Kun Lee scored seven raid points in the first half for the Bengal Warriors while Sukesh Hegde got the same for the Tamil Thalaivas.

Bengal Warriors ended the first half with a super tackle as the score was 15-15 at the break.

Bengal Warriors defence got their act together at the start of the second half and forced a super tackle to avert an all out in the 23rd minute.

Tamil Thalaivas wasted a couple of opportunities to inflict an all out in the second half. Jang Kun Lee completed his super 10 in the first half.

With less than five minutes to go, Bengal Warriors held a slender two-point lead with the score 23-21 in their favour.

Bengal Warriors maintained their calm and composure in the final few minutes and won the match 27-24.