U Mumba defeated Bengal Warriors 31-20 to register their 14th win in the 2018 Pro Kabaddi League. 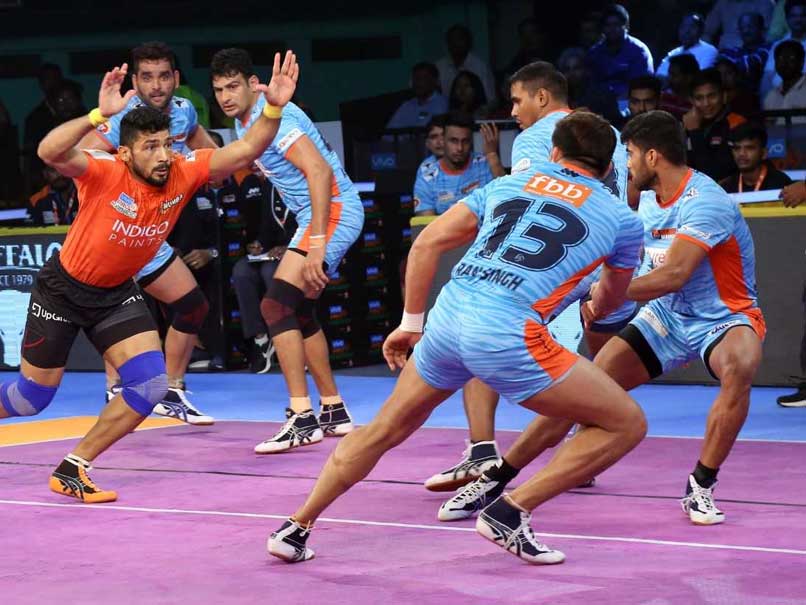 U Mumba rode on a collective effort from their raiders and defenders to beat Bengal Warriors 31-20 in a Pro Kabaddi League (PKL) match at the Rajiv Gandhi Indoor Stadium in Vishakhapatnam on Saturday. It was their 14th win in the season from 19 matches. Later in the other match, Telugu Titans defeated Jaipur Pink Panthers 36-26 at the same venue. Raider Siddharth Desai led the attack for Mumbai and collected seven points. Mumbai captain Fazel Attrachalli, Surrender Singh and Rohit Baliyan chipped in with four points each in Bengal's routing.

For Bengal, Maninder Singh was the top contributor with five points, while Baldev Singh and Ran Singh picked up four points each. This was Bengal's sixth loss from 15 games.

Maninder opened Bengal's account with a successful raid but Rohit took a point during Mumbai's next raid to level the scores at 1-1. A souple of unsuccessful raids by Siddharth and Rohit saw Bengal take a 3-1 lead by the third minute.

Some great tackles and successful raids further helped Bengal to take a 5-2 lead before a super tackle by Mumbai cut the deficit to 4-5. Siddharth then came up with a raid point help Mumbai draw level at 5-5 in the ninth minute.

Mumbai then rode some great tackles and Rohit's back to back raid points to make the issue 11-7 before Siddharth's stunning raids guided his team to a 15-10 lead by half-time.

Just as the second-half kicked off, U Mumba inflicted an all-out to extend their lead to 18-10. The Fazel-led side then dominated Bengal in all departments of the game to stretch their lead to 24-13 by the 30th minute.

Bengal somehow managed to fetch a couple of points to take their tally to 15 points, but Siddharth seemed to be in no mood to relax as his brilliant two-pointer made the issue 27-16 in Mumbai's favour by the 36th minute.

Darshan Kadiyan's successful raid and a tackle point by Fazel further saw Mumbai extend their lead to 29-17 with less than two minutes to go.

Bengal collected three points in the dying moments, but Mumbai also collected a couple of points to register a comfortable 31-20 victory.