U Mumba's Dharmaraj Cheralathan and Rohit Ranaearned 17 tackle points on the night to consolidate their position on top of Zone A. 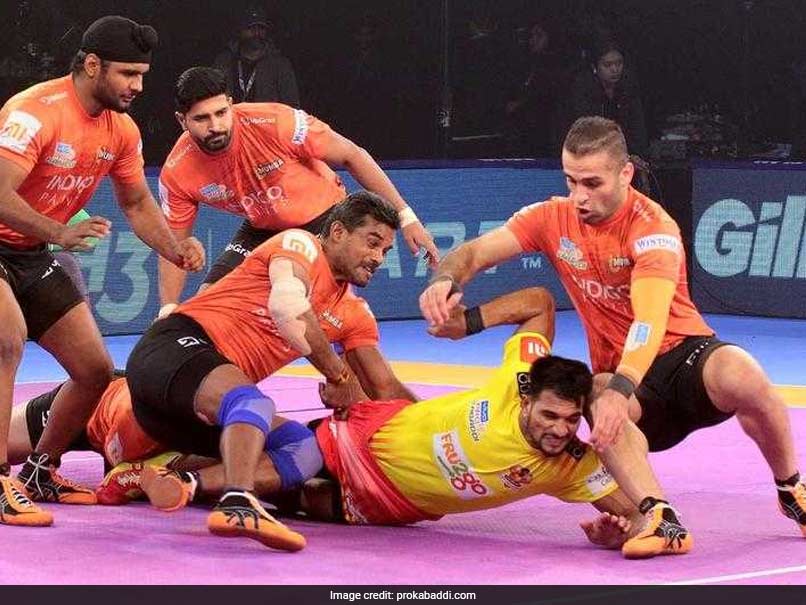 U Mumba's defence unit contributed in their victory against Gujarat Fortunegiants.© PKL

U Mumba registered their first victory over Gujarat Fortunegaints in six attempts to win the tie 36-26 at the Thyagaraj Sports Complex in Delhi on Sunday in a Pro Kabaddi League clash. U Mumba's Dharmaraj Cheralathan and Rohit Rana earned 17 tackle points on the night to consolidate their position on top of Zone A. U Mumba scored a total of 16 tackle points, which was more than their raiders scored. For Gujarat Fortunegiants, Sachin scored eight points while Prapanjan chipped in with four points.

Rohit Balliyan's two-point raid in the third minute gave U Mumba 4-2 lead. U Mumba looked like a team in a hurry as they took just four minutes to inflict the first all out to lead 9-4.

Sachin got a couple of raid points for Gujarat as they trailed 6-9 after six minutes of play. It was Sachin's raiding prowess that kept GujaratFortunegiants in the match as he kept on picking raid points at regular intervals.

Gujarat Fortunegiants sent Siddharth Desai to the bench with a strong tackle to trail 11-12 after 13 minutes.

It was a close encounter between two evenly matched teams as neither of the teams refused to give an inch. U Mumba went into the break leading 17-14.

Siddharth Desai picked up a vital raid point in the 26th minute to give U Mumba 20-17 lead. Desai followed it up with another raid in the 29th minute as U Mumba opened up a 10-point gap.

Sachin tried to rally Gujarat back into the match with a few raid points but U Mumba were in no mood to relinquish their lead.

U Mumba forced a super tackle and collected a couple of more tackle points in the last five minutes of the match.

In the other night of the match, Dabang Delhi beat Puneri Paltan 35-24. Deepak Kumar Dahiya starred for Dabang Delhi with 10 raid points and Sandeep Narwal got three tackle points

By virtue of this match, Puneri Paltan is placed third with 47 points, while Dabang Delhi is placed fourth with 45.