In the other clash, Bengal Warriors beat Bengaluru Bulls 37-31 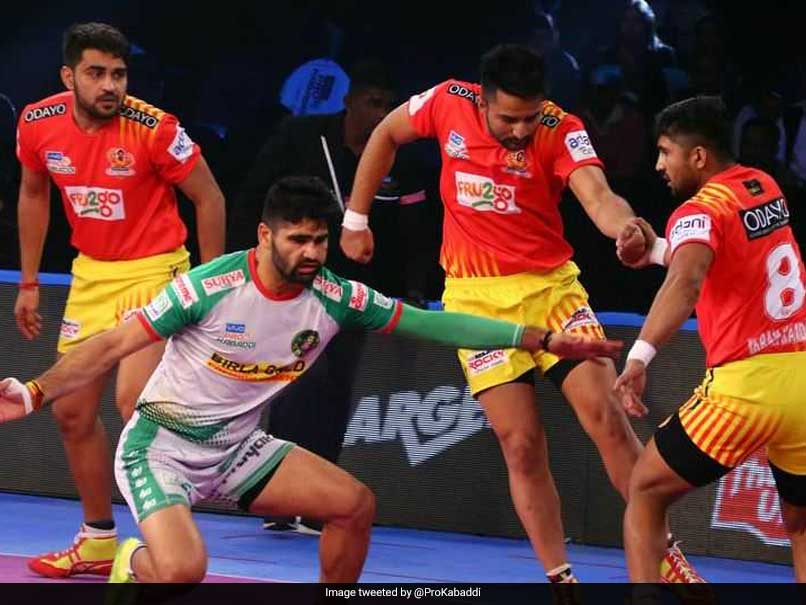 The matches were held at the Netaji Indoor Stadium in Kolkata.© PKL/Twitter

Gujarat Fortunegiants produced an excellent second-half performance to beat defending champions Patna Pirates 37-29 in a Pro Kabaddi League (PKL) clash in Kolkata at the Netaji Indoor Stadium on Wednesday. Sunil Kumar with a high five marshalled the defence superbly for Gujarat. Rohit Gulia with 10 points and Ajay Kumar with eight points led the raiding charge. Despite getting a super 10, Pardeep Narwal missed two raids in the last two minutes as Patna are now staring at elimination. Patna Pirates can still make it to the playoffs if UP Yoddha don't win against Bengal Warriors.

Patna in the first half relied on Pardeep raid points as they maintained a lead. Gujarat's defence got their first tackle point in the 7th minute to trail 5-6.

Pardeep made a two-point raid in the 11th minute to give Patna 8-6 lead. Rohit kept Gujarat in contention as he led the raiding charts for the team.

After 14 minutes, it was a close encounter with Patna holding a slender one-point lead. Gujarat's defence made a slow start to the match but came on their own as they inflicted a super tackle to level the match. At the end of the first half Gujarat led 13-12.

The second half began on a strong note for Gujarat, with Rohit picking raid points consistently and their defence keeping Pardeep quiet as they led 21-16 after 30 minutes.

Tushar Patil made a two-point raid in the 35th minute as Patna cut the lead to 22-24 but were reduced to just two men. Gujarat Fortunegiants inflicted an all out in the 36th minute as they led 28-23.

Pardeep picked up a two-point raid in the 37th minute as Patna trailed 26-29. With less than three minute to go, Gujarat held a slender two-point lead. Sunil put in an excellent super tackle on Pardeep to give Gujarat a 32-28 lead.

Gujarat forced another super tackle in the 39th minute to ensure a comfortable victory.