The five-time champions had to let go of players like Hardik Pandya, Krunal Pandya and Ishan Kishan, who have played a central role in the team's success over the past few years. 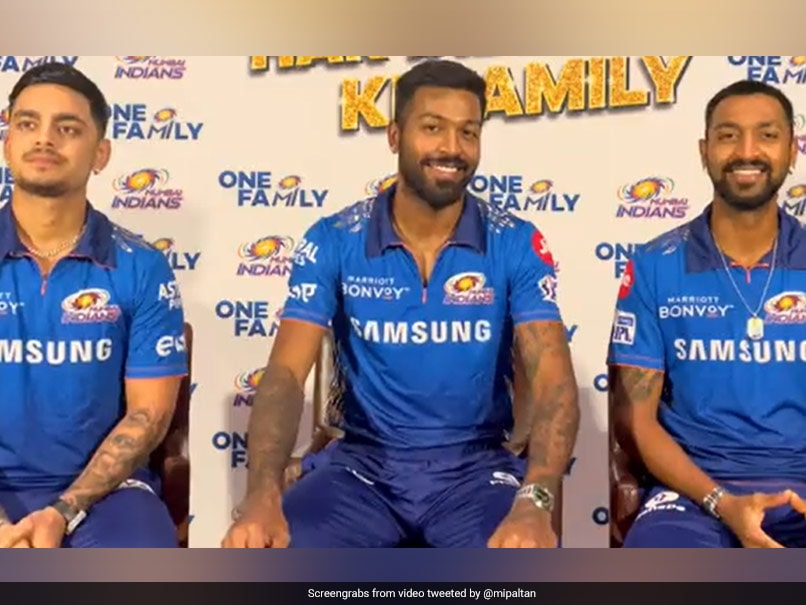 Hrdik Pandya, Ishan Kishan and Krunal Pandya were not retained by Mumbai Indians

Mumbai Indians on Tuesday decided to retain four players ahead of the IPL 2022 auction, the maximum number that was allowed for every team. IPL's most successful franchise retained captain Rohit Sharma, vice-captain Kieron Pollard, top order batter Suryakumar Yadav and premier paceman Jasprit Bumrah. What this meant was that the five-time champions had to let go of players like Hardik Pandya, Krunal Pandya and Ishan Kishan, who have played a central role in the team's success over the years. Hardik, Krunal and Ishan had played a stellar role in MI's back-to-back IPL triumphs in 2019 and 2020.

While it was a tough call to to take for the team management, the franchise will look to try and keep most of players by going for them in the auction.

But that is a matter of chance and everyone knows that.

On Thursday, the franchise took to twitter to share an old video of the trio of Hardik, Krunal and Ishan in which they can be seen having a great time.

The Mumbai Indians is a team that had kept its core together for a very long time and that is something which has yielding very good results for the team in the IPL.

Hardik has scored 1476 runs at a strike-rate of over 150 for the franchise and won several matches with his powerful hitting down the order. He has also picked 42 wickets for the team. His brother Krunal on the other hand scored 1143 runs and took 51 wickets for MI. Krunal's biggest contribution was a knock of 47 in the 2017 final against Rising Pune Supergiant, which helped MI win the trophy that season.

Ishan Kishan has scored 1133 runs for the team and played several important knocks at the top of the order.

Hardik Pandya Krunal Pandya Ishan Kishan IPL 2022 Cricket Social
Get the latest updates on ICC T20 Worldcup 2022 and CWG 2022 check out the Schedule, Live Score and Medals Tally. Like us on Facebook or follow us on Twitter for more sports updates. You can also download the NDTV Cricket app for Android or iOS.