Watch: "No Off Days" For Ravichandran Ashwin As He Plays Chess Mid-Air En Route To Kolkata For GT vs RR Qualifier 1

IPL 2022: Ravichandran Ashwin was seen playing chess on the flight as Rajasthan Royals travelled to Kolkata for Qualifier 1. 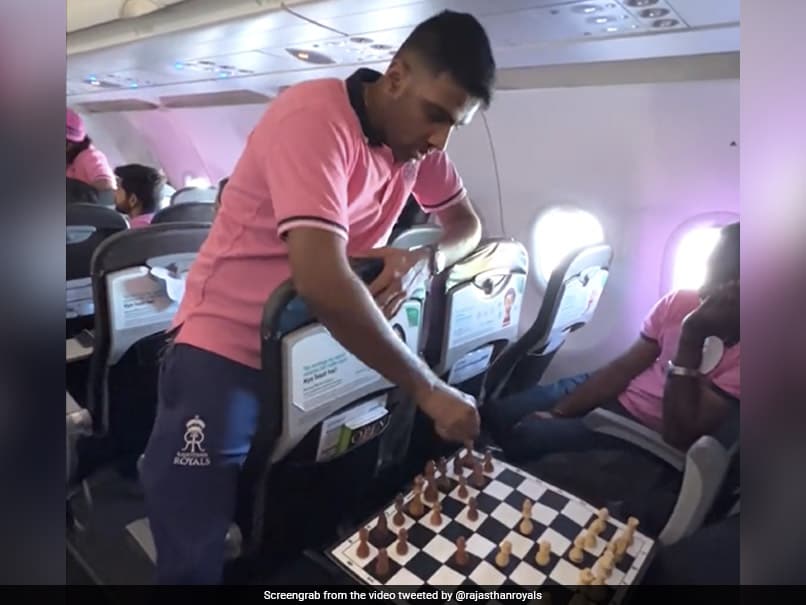 Ravichandran Ashwin was spotted playing chess on the flight.© Twitter

Rajasthan Royals face Gujarat Titans in the Indian Premier League (IPL) 2022 Qualifier 1 in Kolkata on Tuesday. The Sanju Samson-led RR finished the league stage at the second spot behind the top-placed GT. RR have been boosted by some great batting performances from Jos Buttler and some terrific spin bowling from Yuzvendra Chahal. Veteran off-spinner Ravichandran Ashwin has also delivered for them with the ball as well as the bat. In 14 matches, Ashwin has taken 11 wickets. He has an economy of just 7.14 RPO. With the bat, he has often been used in the top-order and has scored 183 runs at an average of 30.50.

Despite such good performances in the league stage, Ashwin is in no mood to give his mind a rest. It was visible during RR's travel to Kolkata for Qualifier 1, where the spinner could be seen playing chess on the flight.

Meanwhile, former New Zealand and Royal Challengers Bangalore captain Daniel Vettori has said that Sanju Samson's team holds a slight edge over Hardik Pandya's GT because of the presence of three seasoned bowlers who could use their experience on a big match day.

"I love the Ashwin-Chahal combination, I think that gives Rajasthan something special through the middle. So, I think Rajasthan are just a little bit in front because of those two and Trent Boult. There's nothing to take away from the Gujarat bowling line-up but I think Rajasthan just have the edge," Vettori said on ESPNCricinfo's T20 Timeout Show.

Chahal leads the Purple Cap race with 26 wickets from 14 matches so far. Trent Boult has accounted for 13 scalps in as many matches while the tall Prasidh Krishna has picked up 15 wickets in 14 matches so far for the franchise.

Ravichandran Ashwin IPL 2022 Gujarat Titans vs Rajasthan Royals, Qualifier 1 Cricket
Get the latest updates on Fifa Worldcup 2022 and check out  Fifa World Cup Schedule, Stats and Live Cricket Score. Like us on Facebook or follow us on Twitter for more sports updates. You can also download the NDTV Cricket app for Android or iOS.