"Proper Day At The Pool": Virat Kohli Chills Out With Teammates In UAE Heat

Royal Challengers Bangalore captain Virat Kohli enjoyed a "proper day at the pool," along with his teammates. 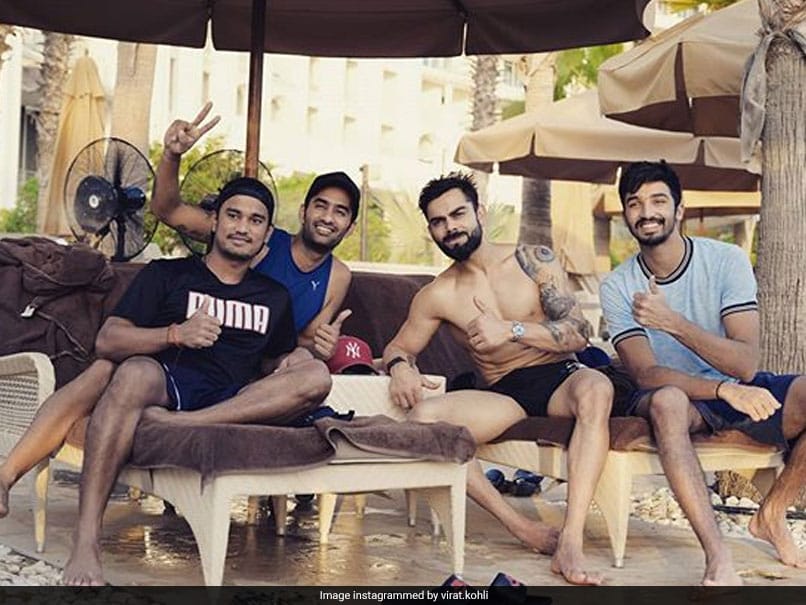 Virat Kohli and his RCB teammates chilling by the pool.© Virat Kohli/Instagram

Virat Kohli had a “proper day at the pool” on Tuesday and he has let his fans know with a picture he posted on Instagram. A relaxed Kohliis seen lying on his back on a recliner as he cheerfully poses for the camera and gives out the victory sign. The Royal Challengers Bangalore (RCB) captain has his task cut out for the 13thseason of Indian Premier League (IPL) in terms to helping his team win their maiden IPL title, but his pool times are relaxing nevertheless as they come as a much-needed respite from the heat and humidity in the UAE, IPL's host for the season. His RCB teammates Pawan Negi and Gurkeerat Singh Mann also enjoyed themselves by the pool.

A proper day at the pool yesterday

Kohli is highest scorer in the history of IPL with 5412 runs. In 2016, he broke the record for most runs in a single IPL season by scoring 973 runs with four centuries – also an IPL record.

Kohli is optimistic nevertheless as he said that the current RCB squad is the “most balanced” that he has had since 2016 when the team last made the final.

The addition of Aaron Finch, the No.3-ranked batsman on the ICC T20 rankings, comes as a boost to RCB as their top order had so far been heavily dependent on how Kohli and AB de Villiers fared.

Bowling has always been RCB's weaker link and the likes of Umesh Yadav, Mohammad Siraj, Navdeep Saini and Yuzvendra Chahal would hope that a change of venues from the batting-friendly M Chinnaswamy Stadium to the UAE would give the bowlers some cushion against the power hitters of T20 cricket.

RCB play their first match against SunRisers Hyderabad on September 21.

Gurkeerat Singh Mann IPL 2020 Cricket
Get the latest updates on SA vs IND 2021-22, check out the Schedule and Live Score . Like us on Facebook or follow us on Twitter for more sports updates. You can also download the NDTV Cricket app for Android or iOS.