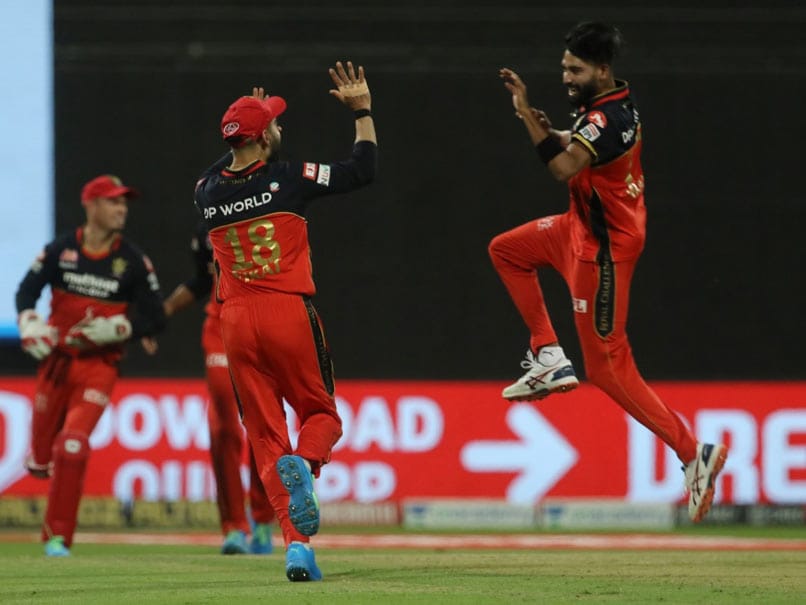 Royal Challengers Bangalore (RCB) skipper Virat Kohli hailed pacer Mohammed Siraj for making a fine comeback, after a tough season in the previous year. Siraj drew a lot of criticism after conceding plenty of runs in the last edition. The Indian cricketer's inclusion in the RCB lineup for the IPL 2020 league clash against Kolkata Knight Riders (KKR) on Wednesday further drew a lot of memes. However, Siraj had a fitting response in store for such critics as he picked three wickets while conceding just eight runs during his bowling spell of four overs. The 26-year-old accounted for the vital dismissals of Rahul Tripathi, Nitish Rana and Tom Banton, going on to script history during the course of his spell. Siraj became the first bowler to deliver two maiden overs in an IPL match, with KKR eventually restricted to a paltry score of 84 runs.

"Last year Siraj had a tough year and a lot of people went hard at him. This year he has worked hard and was bowling well in the nets. He has seen the results now but we want him to keep following the process," said Kohli during the post-match conference when asked to discuss his pacer's performance.

The RCB skipper further admitted that the decision to hand Siraj the new ball was a late call, with Washington Sundar the initial choice for the role.

"I was thinking Washy for the new ball. It was a good toss to lose because we would have batted first. The plan was to bowl Washy and Morry, but then we thought let's go Morris and Siraj," he added.

Kohli further praised Chris Morris, who has been economical and taken wickets since coming into the side, after missing the start of the tournament with an injury.

"Morry is living the responsibility. He is the guy who likes to take the leadership role. His energy is amazing. He can contribute with the bat, ball and in the field," Kohli said of the South African all-rounder.

Kohli also said the management has played a crucial role in the team's performance this season.

"The management has set in a culture where there is proper planning. It is not random," the RCB skipper said.

However, Kohli was also quick to point out that the team had faith in their abilities this year and that has also been a big reason why they are near the top of the table.

"You can have all the plans, but you have to have belief," Kohli said.

RCB chased down the target of 85 runs in 13.3 overs, with opener Devdutt Padikkal (25) emerging as the highest run-scorer.

Virat Kohli Mohammed Siraj Devdutt Padikkal Nitish Rana Tom Banton Cricket
Get the latest updates on SA vs IND 2021-22, check out the Schedule and Live Score . Like us on Facebook or follow us on Twitter for more sports updates. You can also download the NDTV Cricket app for Android or iOS.