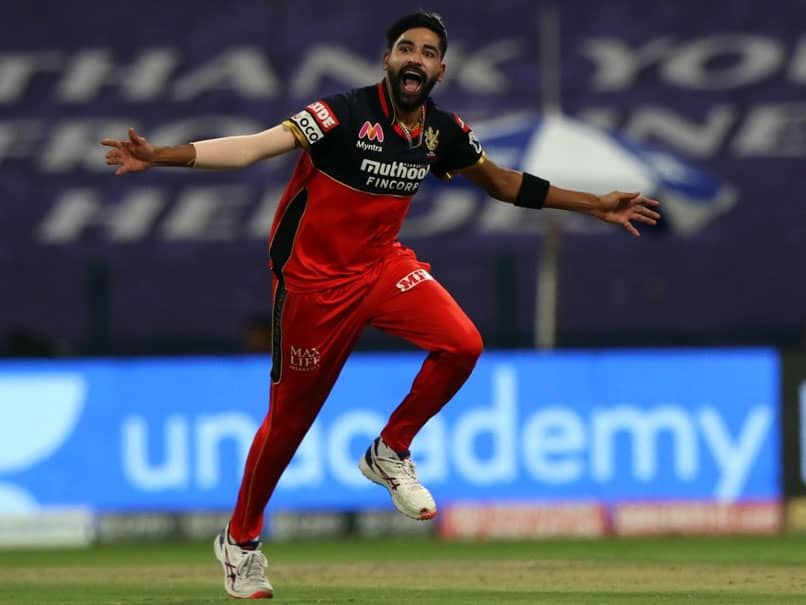 Mohammed Siraj has become the first bowler to bowl two maiden overs in the same Indian Premier League (IPL) match. He returned figures of three wickets for no runs from his first two overs for Royal Challengers Bangalore (RCB) against Kolkata Knight Riders (KKR) on Wednesday in Abu Dhabi. Siraj rattled KKR in the first four overs of their innings as he dismissed opener Rahul Tripathi, Nitish Rana and Tom Banton in his first two overs without conceding a run off the bat. He gave away a run only in his third over and finished his first spell of three overs with figures of 3-2-2-3.

First Tripathi, next ball Rana - Siraj was on a roll as he picked two wickets in two balls to wreck KKR early. Splendid bowling from Siraj.https://t.co/gf6m8Ijczn #Dream11IPL

KKR won the toss and elected to bat and they were rattled by Siraj's lengths and his consistently hitting the channel outside off as their top order collapsed like a pack of cards.

Tripathi (1) was caught behind by AB de Villiers off the third ball of the second over of the innings and Rana (0) was bowled by a perfect inswinger on the very next ball.

Tom Banton foiled Siraj's hopes of a hat-trick but the England batsman could not last long as Siraj got him caught behind as well for 10.

RCB are placed third on the points table with 12 points from nine matches while KKR are fourth with 10 points.

Kolkata Knight Riders Mohammed Siraj IPL 2020 Kolkata Knight Riders vs Royal Challengers Bangalore, Match 39 Cricket
Get the latest updates on India vs Australia Series, check out the India vs Australia Schedule for 2020-21 and Ind vs Aus live score . Like us on Facebook or follow us on Twitter for more sports updates. You can also download the NDTV Cricket app for Android or iOS.