IPL Auction 2020: Kings XI Punjab went into the auction with the biggest available purse of Rs 42.70 crore and spent big on players like Glenn Maxwell and Sheldon Cottrell. 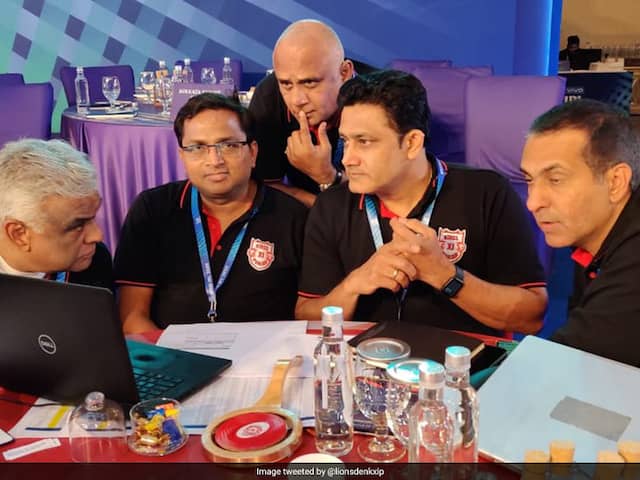 Kings XI Punjab head coach Anil Kumble on Thursday said his franchise went all out for Glenn Maxwell in the IPL auction as the team needed firepower in the middle-order. KXIP, who went into the auction with the biggest available purse of Rs 42.70 crore, spent Rs 10.75 crore for Australia's Maxwell and Rs 8.50 crore for West Indian pacer Sheldon Cottrell.

"For us, the gaps that we had to fill were pretty evident. We had to fill the fast bowlers slots and also the power-hitters because for us, in the middle order we needed someone who could really be a destructive player and that's why we chose Glenn Maxwell," Kumble said.

"Of course all-rounders are a blessing, if you can get one. And we were lucky to get (Jimmy) Neesham, (Sheldon) Cottrell and (Chris) Jordan. Obviously, the choice or the money that we had to spend was more on the four foreign players," said the spin great.

On buying young pacer Ishan Porel for his base price of Rs 20 lakh, Kumble said: "The idea was to have an Indian fast bowler. Ishan has done really well in domestic cricket. He is someone who we had identified and he's I think a good backup for Mohammad Shami both come from the same Ranji team (Bengal)."

In the middle of the auction, KXIP also announced KL Rahul as their skipper for the 2020 edition.

"I think we have seen one of the best captains in Indian cricket being a wicket-keeper and batsman (MS Dhoni). I think we also have Nicholas Pooran in the team so yes I mean still a few months before we sit down and identify who's gonna keep wickets," he said referring to the wicket-keeping options, Rahul and Pooran.

Nicholas Pooran IPL 2020 Cricket
Get the latest Cricket news, check out the India cricket schedule, Cricket live score . Like us on Facebook or follow us on Twitter for more sports updates. You can also download the NDTV Cricket app for Android or iOS.