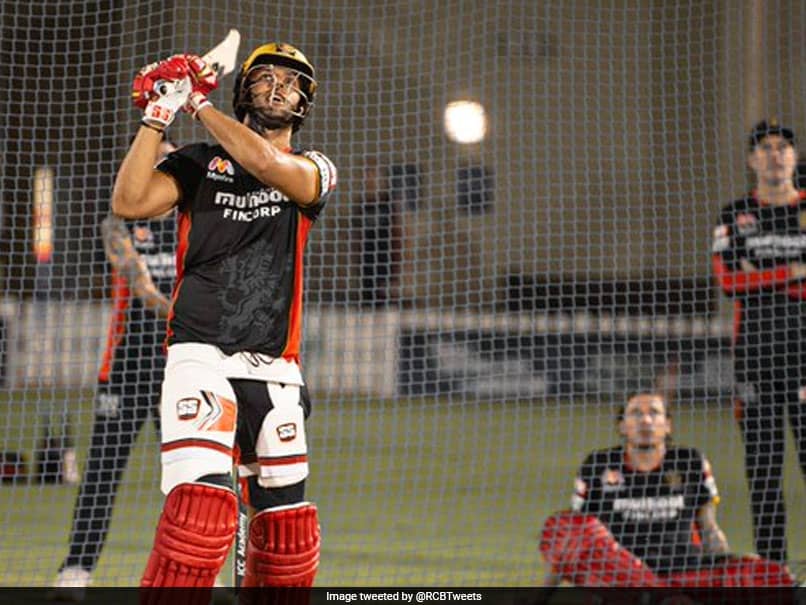 Royal Challengers Bangalore (RCB) skipper Virat Kohli hailed Shivam Dube and Washington Sundar for holding their composure in the match against SunRisers Hyderabad in the Indian Premier League (IPL). RCB managed to defeat SunRisers Hyderabad by 10 runs to gain their first victory in the tournament. In the match, Sundar bowled just one over, conceding seven runs. Kohli said that the way the spinner pegged back the over after getting hit for a six on the second delivery was very remarkable to watch. RCB's official Twitter handle posted a video on Wednesday, in which Kohli, head coach Simon Katich and Director of Cricket Mike Hesson can be seen addressing the team after the win against Hyderabad.

"There are a couple of things for me that stand out from this win, I think we have spoken about the usual suspects Yuzvendra Chahal and Devdutt Padikkal. But I want to mention two guys who showed great composure against Hyderabad," said Kohli while addressing the team in the dressing room.

"I know Washington Sundar did not bowl three overs, but to go for a six on the second ball of the over and still bowl the over he did, not letting it become a big over was an outstanding effort.

"The second one is Shivam Dube, bowling two overs in the last four was an outstanding effort.

"The chat we had in the second strategic timeout with Hyderabad needing 43 off the last five overs with eight wickets in hand, we knew that in the past not many times we had given ourselves to defend this type of total but I did not see shoulders drop and for me, that is the essence of how we want to play this year," he added.

In the match against Hyderabad, Yuzvendra Chahal finished with figures of 3-18 and he got the crucial wickets of Jonny Bairstow, Manish Pandey, and Vijay Shankar.

On the other hand, Shivam Dube finished with figures of 2-15 in his quota of three overs.

SunRisers were 121/2 at one stage and they were looking comfortable in their pursuit of 164. However, Yuzevndra Chahal and Navdeep Saini staged a stunning comeback for RCB and Hyderabad lost eight wickets for just 32 runs, losing the match by 10 runs.

"Well done boys, I think you should be proud of the spirit you all showed in the game against SunRisers Hyderabad. You never gave up, hung in there even when Bairstow was going really well," said Katich.

"That's the stand out for me that you kept helping each other out and you guys stuck together. It was magnificent to watch," Katich said while addressing the RCB team after the win against Hyderabad.

"Two guys on debut today set up the game for us, well done Finchy and Devdutt, you guys helped each other out and it was crucial for us. The will to win will hold us in good stead," he added.

Earlier, for RCB, Devdutt Padikkal and AB de Villiers scored half-centuries to take the side's total to 163/5 in the allotted twenty overs.

Sunrisers Hyderabad IPL 2020 Cricket
Get the latest updates on IPL 2021, IPL Points Table , IPL Schedule 2021 , live score . Like us on Facebook or follow us on Twitter for more sports updates. You can also download the NDTV Cricket app for Android or iOS.