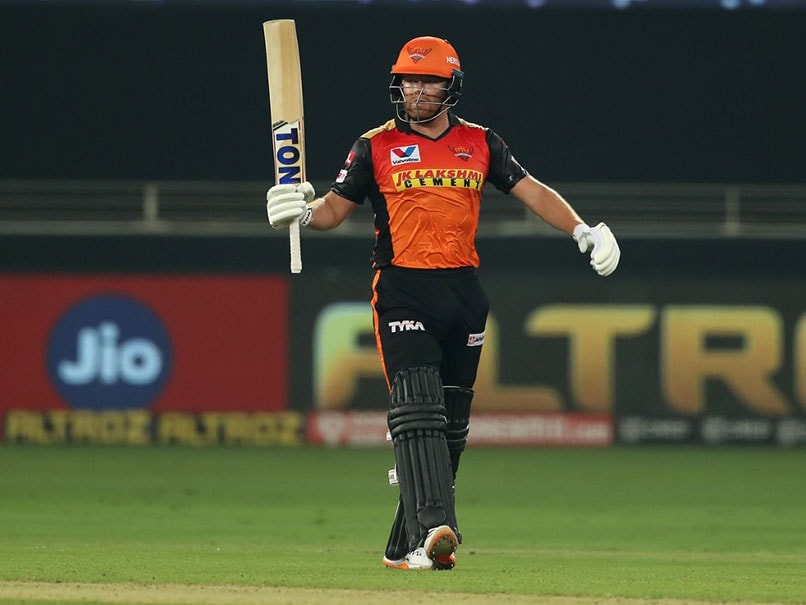 SunRisers Hyderabad fed off a 160-run opening stand between skipper David Warner and Jonny Bairstow and then Rashid Khan's immaculate lines with the ball as they beat Kings XI Punjab by 69 runs in Dubai on Thursday. Bairstow narrowly missed out on a second Indian Premier League (IPL) century, scoring 97 off just 55 balls and combined with Warner, who smashed 52 off 40, to score the bulk of the runs as SRH finished on 201/6. In reply the fabled top-two of Punjab, captain KL Rahul and Mayank Agarwal, didn't fire and despite Nicholas Pooran's breezy 77 off 37 they were dismissed for 132 in the 17th over.

Rahul (11) and Agarwal (9) were both dismissed inside the first seven overs as Punjab found themselves 58/3 and behind the asking rate.

However, Pooran tried to take the attack to the Hyderabad bowlers and added 47 for the fourth wicket with Glenn Maxwell (7).

28 of these runs came off Abdul Samad as Pooran smashed the leg spinner for four sixes and a four in one over as Punjab looked firmly in the contest at 91/3 at the end of nine.

But two quiet overs from Rashid Khan and T Natarajan – Hyderabad's top two wicket-takers so far this season who stepped up in the absence of Bhuvneshwar Kumar – led to Maxwell's run out before Mandeep Singh (6) was bowled through the gate by Rashid to reduce Punjab to 117/5 in the 13thr.

Pooran tried to counter-attack by hitting Khaleel Ahmed for consecutive fours in the next but a thin batting line-up – Mujeeb Ur Rahman batted at No. 7 – and wickets at the other end told on the Caribbean.

Mujeeb was dismissed in controversial fashion as an initial referral by the on-field umpires for bump-ball was adjudged out caught behind by the third umpire.

The batsman reviewed the decision but only after being prompted to do so by the Punjab dugout. Replays showed Mujeeb had indeed hit it.

With 76 needed off 36 and Ravi Bishnoi at the other end, Pooran decided to play out Rashid's last over – 15th of the innings – before having a brain fade in the middle and cutting the fifth ball straight to point.

Rashid's last over was a two-wicket maiden as he pinned Mohammed Shami lbw on the final ball of the spell to end Punjab's hopes.

Earlier, Warner chose to bat after winning the toss and the SRH openers tore into the Punjab bowling attack, hitting 100 runs without getting separated in the first 10 overs.

At 160/0 after 15, SRH looked set for a total well in excess of 200. However, both Warner and Bairstow departed one after the other in the 16th over off Bishnoi and that initiated a mini-collapse as Hyderabad lost six for 41 in the last five.

Maxwell was hammered for 20 runs in the 11th over after Bishnoi was taken for 18 in the eighth as the Hyderabad opening duo looked set to finish the innings off.

A slide towards the death ensured SRH could only muster 201 but Punjab capitulated rather poorly.

Rashid finished with 3/12 while Natarajan and Khaleel Ahmed returned two wickets each for SRH.

Bishnoi got three wickets for Punjab while Arshdeep Singh, the left-arm medium pacer, returned with two.

SRH are now placed third on the points table with six points from as many games. Punjab are yet to get off the bottom of the table.

Mujeeb Ur Rahman IPL 2020 Sunrisers Hyderabad vs Kings XI Punjab, Match 22 Cricket
Get the latest updates on IND vs NZ 2021, check out the Schedule and Live Score . Like us on Facebook or follow us on Twitter for more sports updates. You can also download the NDTV Cricket app for Android or iOS.