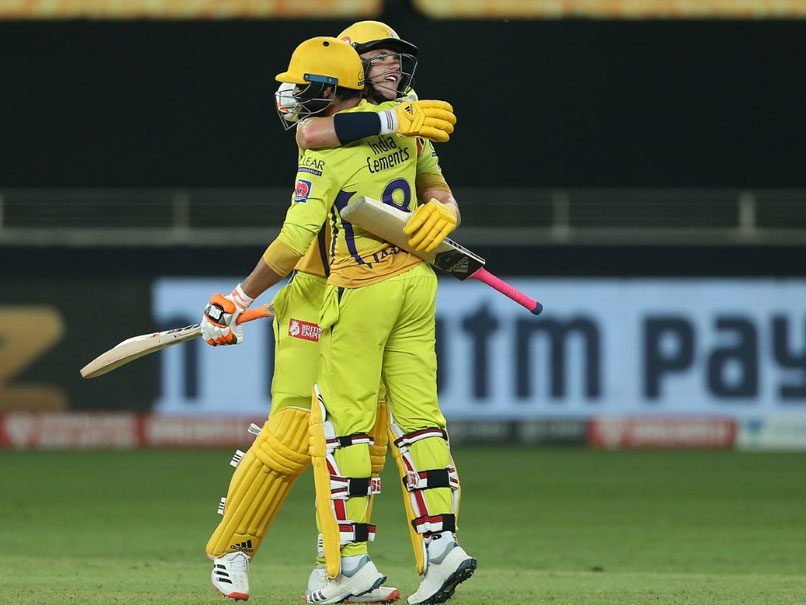 Ravindra Jadeja hit sixes off the last two balls of the match to take Chennai Super Kings over the line against Kolkata Knight Riders in Dubai on Friday. Incidentally, this victory and the positions of other teams in the points table meant that Mumbai Indians have become the first team to qualify for the playoffs. With seven runs needed to win off the last two balls, Kamlesh Nagakoti bowled two length balls that disappeared into mid-wicket stand for sixes as Jadeja finished unbeaten on 31 off 11 balls and helped CSK overhaul KKR's 172 for 5 with six wickets in hand.

10 runs were needed off the last over when Nagarkoti was trusted with the ball by KKR captain Eoin Morgan. He kept his nerve for the first four balls, bowling wide of the two left-handers at the crease - Jadeja and Sam Curran - but erred on the last two deliveries.

30 runs were needed off the last two overs after Pat Cummins bowled an excellent 18th by conceding just four runs and dismissing the highest scorer of the inning, Ruturaj Gaikwad (72 runs off 53 balls).

However, Lockie Ferguson, who had along with Varun Chakravarthy had injected fresh life into the KKR bowling, bowled a no-ball for height in the 19th over, and the resulting free hit disappeared for a six off Jadeja's bat.

An outside edge off the next ball for four through third man meant there were only 10 runs to defend in the last over with Cummins bowled out.

Earlier, Gaikwad played the anchor for CSK after Shane Watson (14) was dismissed early. Gaikwad combined with Ambati Rayudu (38) to add 68 runs for the second wicket after having added 50 with Watson to keep CSK in the chase.

Rayudu and captain MS Dhoni (1) went in quick succession and Curran (13 not out off 14) didn't seem to have found his mojo in this game, but Jadeja's sixes ensured CSK registered only their fifth win in the tournament.

KKR made some strange decisions while they were batting. Rahul Tripathi, who has enjoyed some success in the top order was pushed down to No. 7 while Rinku Singh, playing only his first match this season, was promoted ahead of captain Morgan.

Nevertheless, Nitish Rana shone through the innings with 87 off just 61 balls with 10 fours and four sixes after KKR lost Shubman Gill (26 off 17) in the eighth over.

The middle-order wobble meant that Dinesh Karthik, in at six, had to accelerate towards the death, and his 21 not out off 10 balls took KKR to 172.

Lungi Ngidi returned 2 for 34 while Mitchell Santner, Karn Sharma and Jadeja returned a wicket each for CSK.

For KKR, Cummins and Chakravarthy picked up two wickets each.

Dinesh Karthik IPL 2020 Chennai Super Kings vs Kolkata Knight Riders, Match 49 Cricket
Get the latest updates on ICC T20 Worldcup 2022 and CWG 2022 check out the Schedule, Live Score and Medals Tally. Like us on Facebook or follow us on Twitter for more sports updates. You can also download the NDTV Cricket app for Android or iOS.