The washout against Royal Challengers Bangalore was Steve Smith's last match for Rajasthan Royals in IPL 2019. 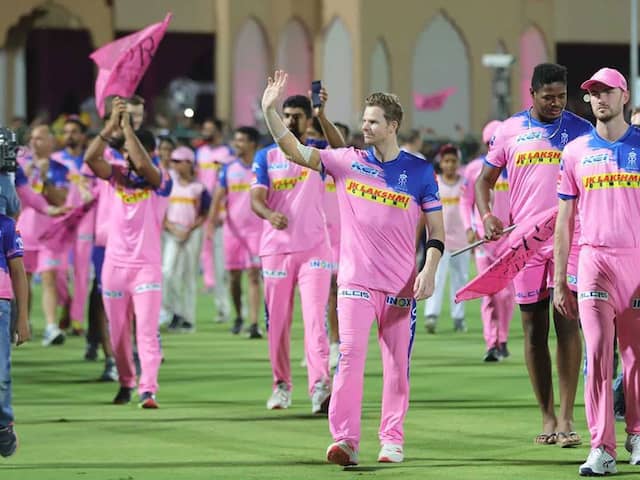 Rajasthan Royals captain Steve Smith played his final Indian Premier League (IPL) 2019 clash against the Royal Challengers Bangalore (RCB) on Tuesday before joining Australia's World Cup squad. Smith, who replaced Ajinkya Rahane as Rajasthan Royals skipper mid-season, wished his team good luck for the remainder of the tournament in his Instagram post. "Thank you @rajasthanroyals for the last 7 weeks. I've enjoyed every minute of this ipl and I'm glad to be involved with such a great franchise with so many wonderful people. Good luck in Delhi boys!  #hallabol," Steve Smith wrote.

Thank you @rajasthanroyals for the last 7 weeks. I've enjoyed every minute of this ipl and I'm glad to be involved with such a great franchise with so many wonderful people. Good luck in Delhi boys! #hallabol

Smith had helped Rajasthan Royals to victory against SunRisers Hyderabad on Sunday when he took an outstretched catch to dismiss compatriot David Warner.

The former Australian captain landed heavily on the right elbow that underwent a major operation in January.

However, Smith brushed aside concerns for his surgically repaired elbow after landing awkwardly.

"All good, I just landed on it quite heavily, more heavily than I had landed on it previously," Smith said on Tuesday.

"From the surgery I have still got some scar tissue and stuff in there and just the impact of the landing affected it a little bit, but there is nothing wrong with it, all good," Cricket Australia's official website reported him saying.

Smith and Warner have been selected in Australia's World Cup squad following their year-long bans for ball-tampering.

The duo has enjoyed a solid comeback in the Twenty20 IPL, with Warner in blistering form, topping the competition batting rankings with 692 runs from 12 innings.

Smith had been restricted to close fielding positions throughout the IPL as his elbow recovers.

"I am throwing at probably 70 or 80 per cent. A couple of weeks and I should be back to throwing at 100 per cent," he said, adding that his elbow rehab was "going really well".

Smith and Warner officially return to Australian colours as they head to Brisbane for a training camp to prepare for the World Cup.

The World Cup starts on May 30 in England and Wales.

Steven Smith IPL 2019 Cricket Royal Challengers Bangalore vs Rajasthan Royals, Match 49
Get the latest Cricket news, check out the India cricket schedule, Cricket live score . Like us on Facebook or follow us on Twitter for more sports updates. You can also download the NDTV Cricket app for Android or iOS.