Sanju Samson had to deal with a very unique problem during the SRH vs RR IPL 2019 match. 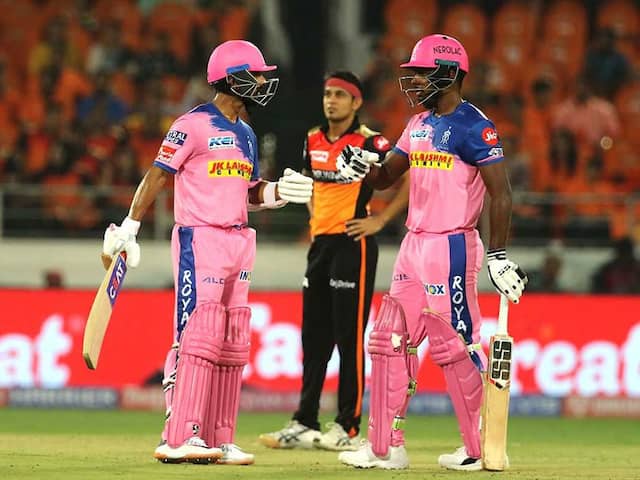 Sanju Samson's march towards a brilliant century was briefly halted due to a pizza delivery.© BCCI/IPL

Sanju Samson smashed an unbeaten century on Friday, becoming the first player to reach the magical three-figure mark in IPL 2019. However, while batting on 44, Sanju Samson had to deal with a very unique problem, rarely seen in a cricket stadium -- a pizza delivery guy having a walkabout in front of the sight screen. The SRH vs RR match was briefly stopped as Sanju Samson, sporting a smile, signalled the pizza delivery person to get out of the way. Thankfully, he did just that and Samson resumed his destruction of the SunRisers Hyderabad bowlers.

Here is a clip of the video when the SRH vs RR match had to halted:

Fortunately, the pizza delivery didn't disrupt Sanju Samson's concentration with the Rajasthan Royals star propelling his team to 198 for two in 20 overs.

This was Sanju Samson's second IPL century, helping him join an elite list of Indian batsmen with more than one IPL hundred.

Sanju Samson remained unbeaten on 102 that came off just 55 balls with the help of 10 fours and four hits over the fence.

However, Samson's knock went in vain as David Warner (69 off 37 balls) and Jonny Bairstow (45 off 28 balls) shared 110-run stand for opening wicket to put the hosts on top in the tricky chase.

Vijay Shankar's cameo of 35 runs off just 15 balls along with Rashid Khan's 15 off 8 helped SunRisers Hyderabad overhaul the target with an over to spare.

This was SunRisers Hyderabad's first win of the season that catapulted them to fourth place in the table. Rajasthan Royals are rock bottom of the IPL Points Table courtesy defeats in their opening two matches.

Rajasthan Royals along with Royal Challengers Bangalore are only teams that are yet win a game in IPL 2019. RCB have a marginally better run-rate than Rajasthan and therefore sit above Ajinkya Rahane-led outfit.

David Warner Jonny Bairstow Rashid Khan IPL 2019 Sunrisers Hyderabad vs Rajasthan Royals, Match 8 Cricket
Get the latest Cricket news, check out the India cricket schedule, Cricket live score . Like us on Facebook or follow us on Twitter for more sports updates. You can also download the NDTV Cricket app for Android or iOS.