Rajasthan Royals have now moved to the sixth position in the eight-team standings with 10 points from 12 games. 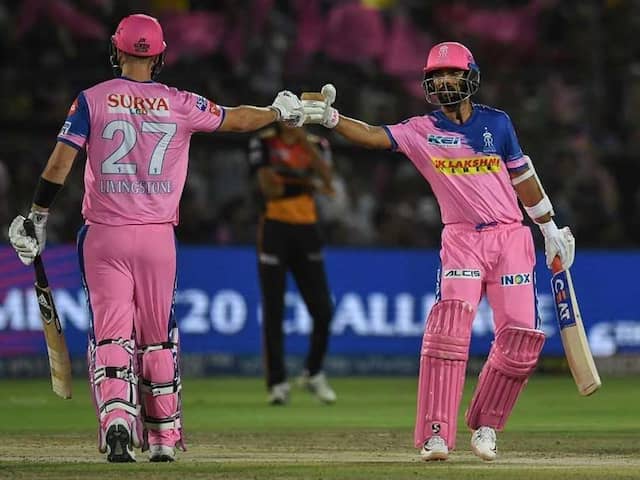 Rajasthan Royals defeated SunRisers Hyderabad by seven wickets to end their home campaign on a winning note and theoretically keep alive their play-off chances in the ongoing Indian Premier League in Jaipur on Saturday. Opting to bowl in a must-win match, Rajasthan first restricted Sunrisers to 160 for eight and then chased down the target in 19.1 overs. By virtue of this win, Rajasthan have now moved to the sixth position in the eight-team standings with 10 points from 12 games.

But to stay in contention for a play-off berth, Rajasthan Royals first must win their remaining two away games against Royal Challengers Bangalore on April 30 and Delhi Capitals on May 4 and then hope for favourable results from other matches.

Despite the loss, SunRisers Hyderabad have just managed to hold to their fourth place in the table with 10 points from 11 games.

Chasing 161, Liam Livingstone (44 off 26) and Ajinkya Rahane (39 off 34) got Rajasthan off to a flying start with the former taking the attack to the opposition.

The duo raced off to 78 off 55 balls for the opening wicket, picking up 60 runs off the first six powerplay overs before Livingstone perished.

Livingstone was in a murderous mood as he didn't spare single Rajasthan bowler and struck four boundaries and three sixes during his explosive knock before departing in the 10th over, edging one to Wriddhiman Saha behind the stumps off Rashid Khan's (1/30) bowling.

An over later Rajasthan suffered yet another blow in the form of Rahane, caught by David Warner at long-off off Shakib Al Hasan (1/26).

Then Sanju Samson (48 not out off 32) and skipper Steve Smith (22) held fort and shared 55 runs in 5.3 overs to take Rajasthan within sniffing distance of win before the latter departed.

But by that time the damage had already been done for Sunrisers as Samson and Ashton Turner completed the formalities with ease.

Earlier, Manish Pandey hit a quick half-century before Sunrisers witnessed a middle-order collapse to be restricted to 160 for eight.

Sent into bat, Sunrisers got off too a good start even after the early dismissal of skipper Kane Williamson (13) with Warner and Manish Pandey sharing 75 runs off just 50 balls for the second wicket before losing the plot after the halfway stage.

Nicely placed 103 for one after 12 overs, Sunrisers lost their next seven wickets for just 44 runs before Rashid (17 not out off 8) played a short cameo towards the end to take the visitors to the 160-run mark.

SunRisers lost Williamson early, cleaned up by Shreyas Gopal (2/30) with a googly in the fourth over. Warner and Pandey then joined hands and played aggressively to stabilise the SunRisers innings. While Pandey was the aggressor of the two, Warner played the second fiddle.

Pandey reached his fifty in 27 balls with the help of eight fours but just when the partnership was looking threatening, a brilliant catch by Smith sent Warner packing.

Warner backed away a long way and tried to slap an Oshane Thomas (2/28) short delivery over extra cover but didn't time the shot perfectly and Smith ran back and dived full length to his right to hold on to a beautiful catch.

Warner's innings was a struggle as he scored 37 off 32 balls but failed to hit a single boundary. Pandey continued his aggressive instinct and lofted Gopal over extra cover for an exquisite boundary.

But the leg-spinner hand the last laugh as he dismissed Pandey in the very next ball, brilliantly caught by Samson as Sunrsiers slumped to 121 for three after 15 overs.

Pandey made a fine 61 off 36 balls with the help of nine boundaries. Vijay Shankar (8) too perished cheaply, caught by Jaydev Unadkat off Varun Aaron (2/36) in the next over as the batsman went for a big shot. Wickets kept on tumbling for Sunrisers after a fine first wicket stand between Warner and Pandey.

The next to depart was Deepak Hooda for a duck caught one-handed off his own bowling by Unadkat (2/26) in the next over.

But Rashid took the onus on himself and garnered 18 runs off Aaron's final over to take Sunrisers to a respectable total.

Rajasthan Royals IPL 2019 Rajasthan Royals vs Sunrisers Hyderabad, Match 45 Cricket
Get the latest Cricket news, check out the India cricket schedule, Cricket live score . Like us on Facebook or follow us on Twitter for more sports updates. You can also download the NDTV Cricket app for Android or iOS.