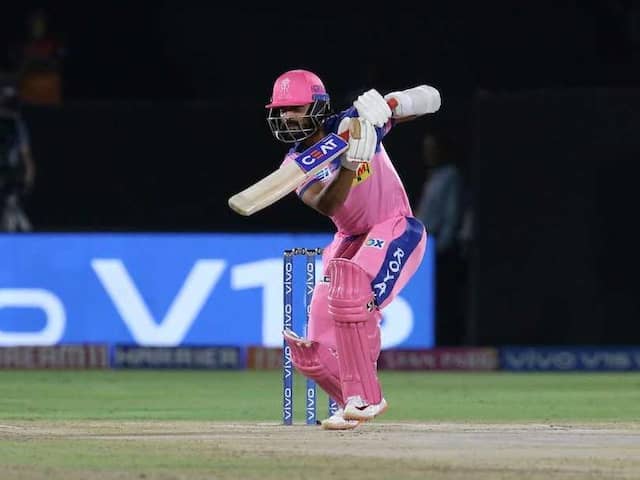 All-round Rajasthan Royals beat SunRisers Hyderabad by seven wickets at the Sawai Mansingh Stadium, Jaipur on Saturday to stay alive in race to playoffs contention in the Indian Premier League (IPL) 2019. In the chase, Ajinkya Rahane (39) and Liam Livingstone (44) took the hosts to flying start, forging a 78-run stand. Their stand made the chase look easy from the onset as Sanju Samson (48 not out) and a cameo from skipper Steve Smith (22) helped the hosts cross the live with five balls to spare. Earlier, Varun Aaron, Oshane Thomas, Shreyas Gopal and Jaydev Unadkat displayed disciplined bowling performances to restrict SunRisers Hyderabad to 160/8. Put in to bat, SRH lost Kane Williamson after a 28-run stand with David Warner. Manish Pandey (61) then stepped in to carry his form from the previous match to score a half-century. He was well complimented by Warner from the other end, who could only manage 37 runs. Following their dismissals, SRH registered a collapse as their middle and lower-order batsmen failed to do much with the bat. (SCORECARD)

Sunrisers Hyderabad IPL 2019 Rajasthan Royals vs Sunrisers Hyderabad, Match 45 Live Score Live Cricket Score Live Blogs Cricket
Get the latest updates on IPL 2020, check out the IPL Schedule for 2020 and Indian Premier League (IPL) Cricket live score . Like us on Facebook or follow us on Twitter for more sports updates. You can also download the NDTV Cricket app for Android or iOS.