Watch: MS Dhoni Sends Warning To Rivals Ahead Of RCB Encounter With Big Hits In Nets 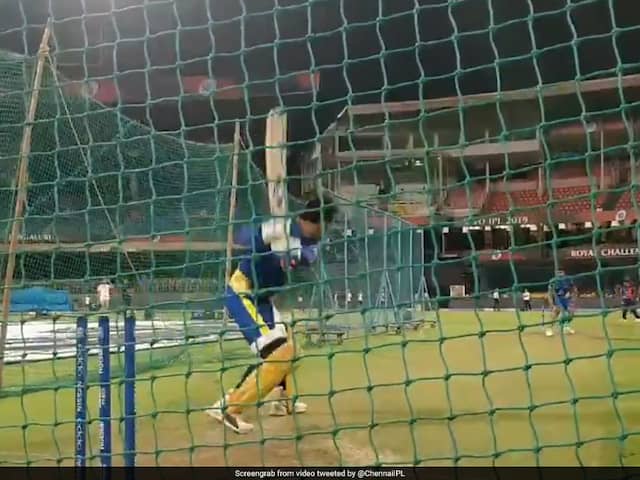 MS Dhoni is CSK's leading run-scorer in the ongoing IPL 2019 with 230 runs.© Twitter

MS Dhoni missed Chennai Super Kings' last match in the ongoing Indian Premier League (IPL) due to back spasm. IPL 2019 table-toppers CSK lost the away match to SunRisers Hyderabad by six wickets on Wednesday. However, skipper MS Dhoni seems match-fit and is expected to make his return when CSK take on Royal Challengers Bangalore at M Chinnaswamy Stadium on Sunday. In a video tweeted by CSK, MS Dhoni is seen playing big hits with excellent footwork during a net session. "Such a fin7sh!," CSK captioned the video.

In the absence of Dhoni, Suresh Raina led the three-time IPL champions. However, he failed to power them to victory despite having won the toss.

After opting to bat, CSK were restricted to 132 for five in 20 overs, with Faf du Plessis having scored a highest knock of 45.

SRH rode on half-centuries by David Warner and Jonny Bairstow to hand CSK their second defeat of the season.

CSK shared some pictures and videos of Dhoni's post-match talk with opponents, saying: "#Thala at the epicentre of the huddle to discuss the #Yellove and much more about the game!"

#Thala at the epicentre of the huddle to discuss the #Yellove and much more about the game! #WhistlePodu #SRHvCSK pic.twitter.com/6OAq7Ivipy

Talking about Dhoni's fitness, stand-in skipper Raina said at the post-match presentation: "He (MS Dhoni) is feeling better. His back was stiff. Probably he will play in the next game against RCB."

Dhoni is CSK's leading run-scorer in the ongoing IPL 2019 with 230 runs from eight matches including two fifties.