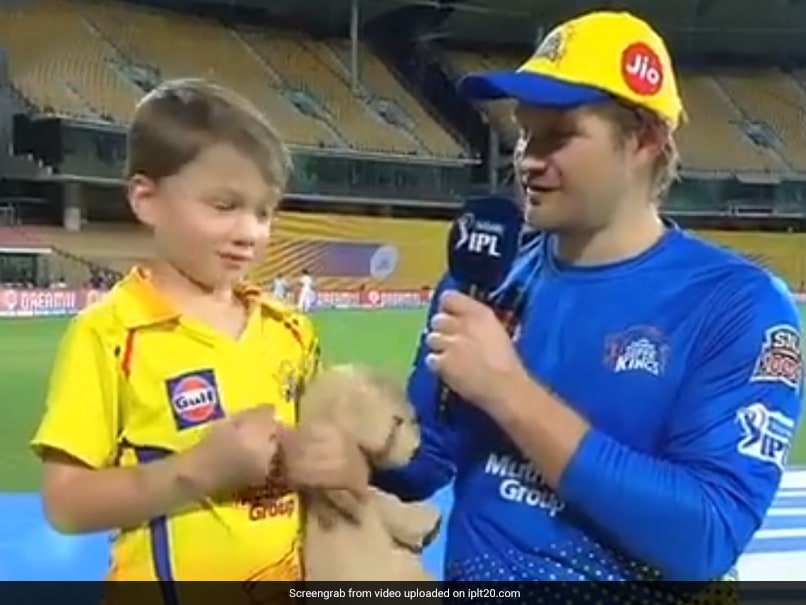 MS Dhoni, the Chennai Super Kings (CSK) captain, has been having some fun with his teammates' kids during the ongoing Indian Premier League (IPL) 2019 and has added some young fans to his never ending list of followers. On Tuesday, Shane Watson smashed 96 off 53 balls to help CSK reclaim the top spot on the IPL points table with a six-wicket win over SunRisers Hyderabad and decided to relive his knock with son William. In a video posted by the IPL Twitter handle, the father and son duo can be seen talking about none other than MS Dhoni. Moreover, Watson Jr reveals that MS Dhoni, who hits sixes all the time, is his high-five buddy.

Little William reveals his high-five buddies among the @ChennaiIPL cubs, the team's six-hitters and dad's innings on Tuesday night. By @RajalArora. #CSKvSRH

The Australian batsman, who struck form after a string of low scores in IPL 2019, helped CSK chased down their target of 176 with one ball to spare.

The 37-year-old opener hit nine fours and six sixes to end CSK's two-match losing run and keep their home record intact in four games so far at the Chepauk stadium.

"I was due for runs, that's for sure," Watson said after receiving the man of the match award.

"I can't thank (coach) Stephen Fleming and (skipper) MS Dhoni enough for their belief in me. Most of the teams I've played in, I would have been dropped by now but they showed the trust in me," Watson said at the post-match presentation.

MS Dhoni IPL 2019 Cricket Chennai Super Kings vs Sunrisers Hyderabad, Match 41
Get the latest updates on T20 World Cup, check out the T20 World Cup Schedule and Live Score . Like us on Facebook or follow us on Twitter for more sports updates. You can also download the NDTV Cricket app for Android or iOS.