IPL 2019: Kedar Jadhav Thanks Chennai Super Kings For Retaining Him For Upcoming Season

Kedar Jadhav played only one match for Chennai Super Kings in the 2018 edition of the Indian Premier League. 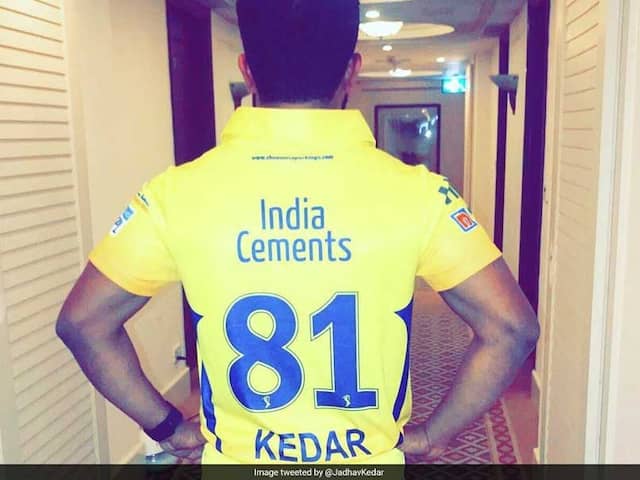 Kedar Jadhav has played 65 matches in IPL accumulating 917 runs at a strike rate of 134.06.© Twitter

The deadline for the squad retention for the 2019 edition of the Indian Premier League (IPL) came to the end on November 15 and many surprising changes came to the fore. While quite a few players were exchanged during the period, many were released from the squad. The retention period also saw some key players being held by the franchises. Among the retained players for Chennai Super Kings was middle-order batsman Kedar Jadhav. After the retention period for the 2019 edition came to an end, Jadhav took to Twitter to thank his franchise for backing him. “I truly appreciate for being retained in CSK for IPL2019. Thank You @ChennaiIPL, eager to wear the yellow jersey again. #WhistlePodu #IPL2019,” Jadhav wrote in his tweet.

I truly appreciate for being retained in CSK for IPL2019. Thank You @ChennaiIPL, eager to wear the yellow jersey again. #WhistlePodu #IPL2019 pic.twitter.com/kZw68mZUzP

Kedar Jadhav, who represented Royal Challengers Bangalore in 2017, was bought by CSK for the 2018 edition for a whopping INR 7.80 Crores. However Jadhav only played one match for his new franchise as he was ruled out of the 2018 IPL after suffering a hamstring injury during the first match.

Kedar Jadhav has had a turbulent year in 2018. After recovering from the injury, the 33-year-old made a comeback to the Indian team for the Asia Cup but once again faced hamstring problems during the tournament.

Jadhav recently made a comeback into the Indian team for the final two One-day internationals against the Windies.

Jadhav, so far has played 65 matches in IPL for five franchises, accumulating 917 runs at a strike rate of 134.06. In the 2010 edition, Jadhav was part of the Delhi Daredevils.

In 2011, the right-hander represented Kochi Tuskers Kerala. From 2013 to 2015, Jadhav played for Delhi Daredevils and his 2016-17 stint was with Royal Challengers Bangalore.

Kedar Jadhav Cricket IPL 2019
Get the latest updates on IPL 2020, check out the IPL Schedule for 2020 and Indian Premier League (IPL) Cricket live score . Like us on Facebook or follow us on Twitter for more sports updates. You can also download the NDTV Cricket app for Android or iOS.