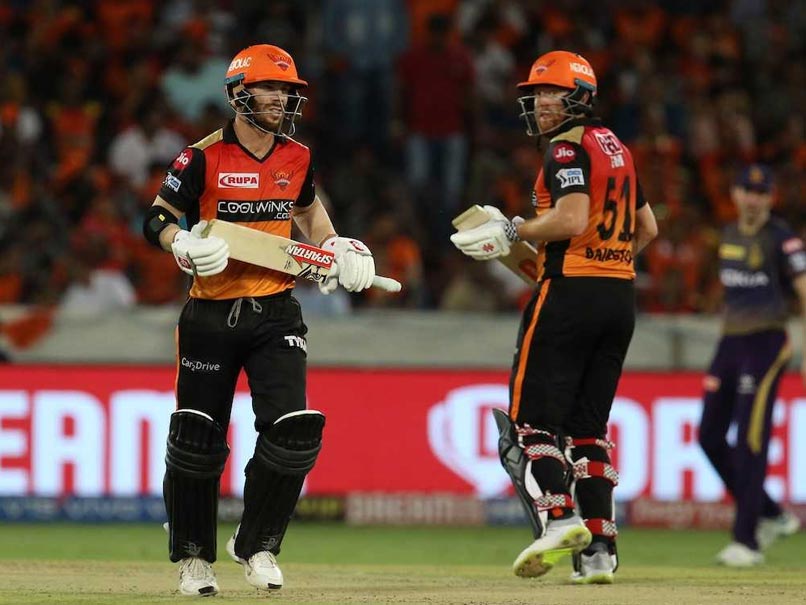 David Warner and Jonny Bairstow have put together 733 runs in the ongoing IPL.© BCCI/IPL

SunRisers Hyderabad (SRH) captain Kane Williamson has heaped praise on the opening pair of David Warner and Jonny Bairstow. The left-right hand combination of Warner and Bairstow has scored the bulk of runs for SRH. They stitched together a 131-run stand for the 1st wicket against Kolkata Knight Riders(KKR) on Sunday which SRH won by 9 wickets. While Bairstow notched up his 2nd IPL half-century scoring an unbeaten 80, Warner scored 67. The Australian is the highest run-getter so far (Orange cap holder) in IPL 2019 with 517 runs in 9 matches at an average of 73.85.

Bairstow has scored 445 runs in 9 matches at an average of 63.57 and is the second highest run-getter at present. Warner and Bairstow have put together 733 runs in the ongoing IPL.

After the game, SRH skipper Kane Williamson praised the duo and termed them as world-class players. "They (Bairstow and Warner) are going to be big losses. They are world class players and they will be missed at the back end."

Bairstow would be leaving SRH after Tuesday's game against Chennai Super Kings (CSK) to attend England's World Cup camp. Warner will also be leaving for Australia in the later stage of the IPL 2019.

Sunrisers Hyderabad IPL 2019 Cricket
Get the latest updates on ICC T20 Worldcup 2022 and CWG 2022 check out the Schedule, Live Score and Medals Tally. Like us on Facebook or follow us on Twitter for more sports updates. You can also download the NDTV Cricket app for Android or iOS.