MS Dhoni's breathtaking 84 not out in the chase against RCB will go down as one of the best knocks in IPL history. 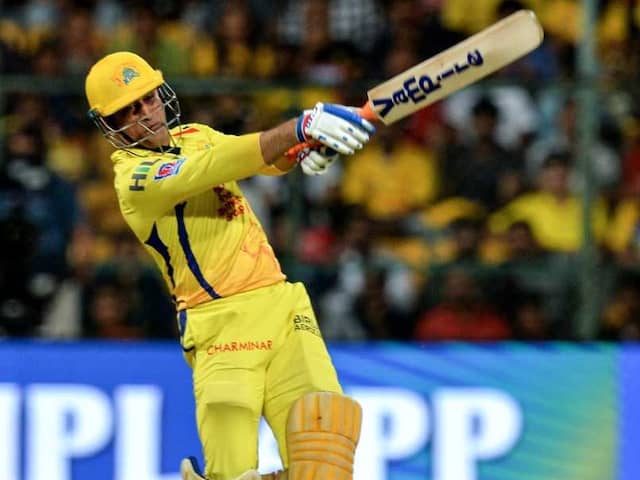 MS Dhoni almost pulled off CSK's chase of 161 as he smashed 5 fours and 7 sixes in his 48-ball blitz.© BCCI/IPL

MS Dhoni served a timely reminder to cricketing fans all over the world that he is far from done ahead of the 2019 World Cup. MS Dhoni's breathtaking knock in the chase during the RCB vs CSK IPL 2019 match at the M.Chinnaswamy Stadium in Bengaluru, took his team to the brink of victory but a run-out on the final ball denied the Chennai Super Kings a famous win. MS Dhoni remained unbeaten on 84 off 48 balls as CSK lost by one run -- their second consecutive loss and the third overall in IPL 2019. However, despite the defeat, MS Dhoni's heroics with the bat sent fans on Twitter into a frenzy with many calling for the former India captain to be made the Primer Minister of the country.

Don't know if he'll ever stand for an election in future. But if he does, I am going to vote for #Dhoni as my PM.

His hunger and commitment to win is second to none. He makes the impossible seem so possible. He's a damn legend. #RCBvCSK

How I wish Dhoni was standing for PM in the ongoing elections!! Imagine how he would efficiently manage India's resources to make our nation even greater!! Dhoni as PM would be the only way to do true justice to this LEGENDARY LEADER!! #Dhoni #RCBvCSK #LokSabhaElections2019 #CSK

Not sure if he stands for elections ,but if he does,my vote goes to @msdhoni
MS Dhoni for PM. One fine day. #Dhoni

There won't and there cannot be a Captain like Dhoni.
Dhoni for PM!#MahiMaarRahaHai #ThereISaidIt #LoveLoveLove

@msdhoni you are a freak!!! This years Vivo IPL just keeps on giving #SelectDugout @StarSportsIndia

There is Dre Russ school of batting and @msdhoni university of batting. @IPL

Chasing a target of 162, CSK needed a near-impossible 26 off the last over bowled by Umesh Yadav. Even the most ardent of CSK fans would have been skeptical about pulling off a win, but Dhoni had other ideas.

MS Dhoni smashed Umesh Yadav for a four and then three sixes to leave CSK needing two runs off the final ball.

Umesh Yadav's slower delivery got the better of MS Dhoni.

RCB wicketkeeper Parthiv Patel, who top-scored with 53 in his team's 161 for seven, hit the stumps to run out Shardul Thakur as Virat Kohli's side managed to win their third game.

The 37-year-old Dhoni, known for his finishing skills, lifted his side from a precarious 28-4 in the sixth over to bring them within touching distance of victory.

He built crucial partnerships including a 55-run fifth-wicket stand with Ambati Rayudu, who made 29, to try and calculate the chase.

In the end it was MS Dhoni who lost to RCB as the skipper found little support around him, fighting a lone battle for much of the chase.

Virat Kohli Shardul Thakur IPL 2019 Royal Challengers Bangalore vs Chennai Super Kings, Match 39 Cricket
Get the latest Cricket news, check out the India cricket schedule, Cricket live score . Like us on Facebook or follow us on Twitter for more sports updates. You can also download the NDTV Cricket app for Android or iOS.